EMEP: For the withdrawal of Turkish army and all foreign powers in Syria – Peace, not war!

The Labour Party (EMEP) made a written statement after the soldiers' deaths in Idlib, demanding the withdrawal of all foreign forces in Syria, including the Turkish soldiers. 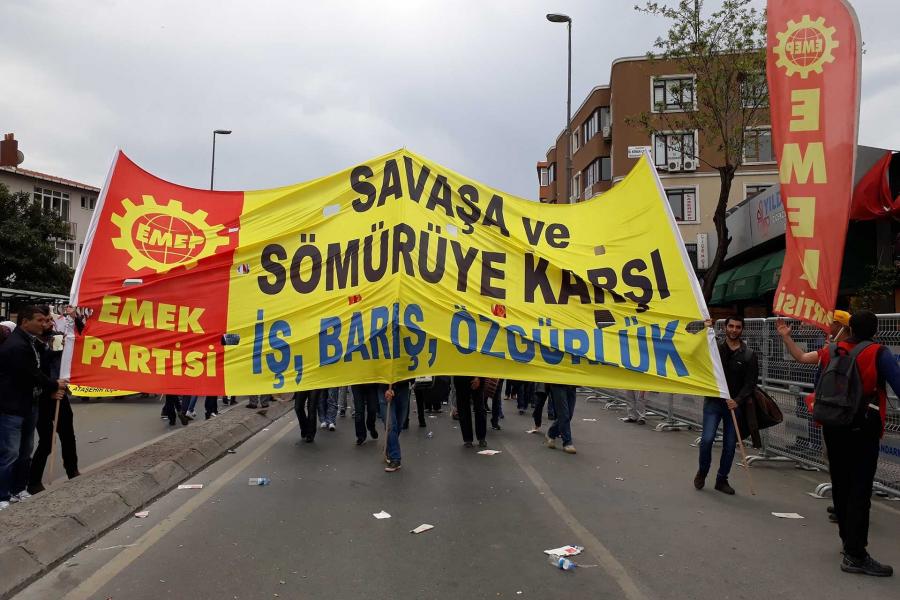 The Labour Party (EMEP) made a written statement after the soldiers' deaths in Idlib, demanding the withdrawal of all foreign forces in Syria, including the Turkish soldiers.

The statement of the Labour Party is as follows:

“The death of 34 soldiers in recent attacks in Idlib has shown once again the high cost of Turkish government’s foreign policy, which is one of intervention in Syria and collaboration with the jihadists.

Following the Syrian army’s operation in Idlib against the jihadists, the Turkish government ignored the calls for the retreat of its soldiers, despite the fact that Turkey’s observation points were under fire, and thus paved the grounds for this bitter result.

The politicians, on the other hand, who do warmongering on these deaths and talk about destroying Syria are feeding on war and just thinking about their future at the expense of opening Turkey to bigger threats.

The use of Turkish soldiers as a shield for the jihadist gangs in Idlib, which is controlled largely by Hayat Tahrir al-Sham, recognised as a terrorist organisation by many countries, including Turkey, has nothing to do with the interests of our country and its people.

Yet, the Erdogan government insists on this wrong policy, which has made the country to pay a heavy price for the past 9 years, a policy which is based on intervention in Syria and the use of jihadist gangs as an instrument for the expansionist desires.

If it is question of national security, as is claimed, then the right thing to do would be the withdrawal of the Turkish soldiers and to take steps to resolve the problems with Syria with peaceful means, rather than putting the soldiers into a position of war with the Syrian army.

The government’s efforts to negotiate with the US on Idlib and to call NATO into action has no use but to drag Turkey into a wider war and open the country to imperialist interventions.

This is confirmed by the fact that the US imperialism was quick to turn the Idlib attack into an opportunity to bring Turkey against Russia and called the Erdogan government to cooperate with the US.

The solution is not in calling NATO into action or turning the country into an area of the ongoing inter-imperialist fight between the USA and Russia for the re-division of the Middle East.

The Labour Party calls on the government and its supporters to stop warmongering and immediately withdraw the soldiers who are under fire in Idlib. The intervention in Syria and cooperation with the jihadist militias must end as this policy has cost the so much and brought it face to face with the threat of war.

The road to peace in Syria and in the region depends on putting an end to imperialist interventions and on the withdrawal of all military forces. Thus, all pro-labour, peace and democracy forces in Turkey and in the Middle East have the task of heightening the struggle for peace on the face of warmongering. Therefore, our party will continue to be part of the fight for democracy in the country and peace in the region.” (EVRENSEL DAILY)

Is a government to promise “martyrdom” to its citizens?

The on-stage rifle is starting to go off in Idlib!