The strike which started on 10 December at İzmir Suburban Rail System (İZBAN) banned by a Presidential Decree, signed by Tayyip Erdoğan. 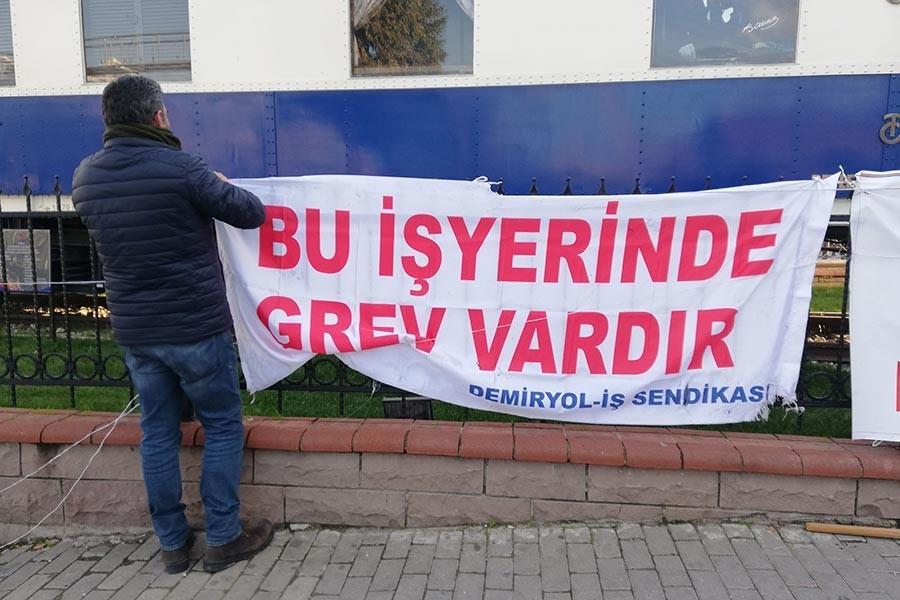 The strike that İzmir Suburban Rail System (İZBAN) workers have kept up for one month to gain the same pay as other rail transport workers has been banned by President Tayyip Erdoğan. Had the strike continued, the workers would have voted today on the latest forthcoming offer.

İZBAN has become another victim of the AKP administration’s strike bans. The strike that was set to enter its thirtieth day at İzmir Suburban Rail System (İZBAN), a joint entity of Izmir Metropolitan Municipality and Turkish State Railways, was hit by a fresh development last night. The strike, held by İZBAN workers who are members of the Railworkers Union affiliated to the Confederation of Turkish Trade Unions, was banned under a Presidential resolution promulgated in the Official Gazette.

The promulgated text signed by President Erdoğan's signature read, “As the strike being implemented by the Turkish Railworkers Union at workplaces subsumed under İZBAN has been deemed to be disruptive to urban public transport services, its suspension for a period of 60 days has been ordered pursuant to Article 63 of the Law on Trade Unions and Collective Labour Agreements number 6356.”

IT'S BANNING NOT SUSPENSION

Article 63 of the Law on Trade Unions and Collective Labour Agreements number 6356 may well carry the heading “suspension of strikes,” but this actually amounts to a ban. According to the statute, the Cabinet suspends strikes for 60 days. When strikes are halted under Cabinet resolution, there is no legal possibility for the strikes restart. Consequently, the parties are either expected to reach agreement within 60 days or the collective labour agreement is terminated by the Supreme Arbitration Board. If this is not done, the union forfeits its collective agreement rights. Hence, this amounts not to suspension, but the outright banning of the strike.

The İZBAN strike has been the sixteenth strike banned in the AKP period. Having previously passed strike bans affecting hundreds of thousands of workers in the metal, petrol, mining, tyre, glass and pharmaceutical industrial branches, a strike in the transport branch has been banned for the first time.

The strike started on 10 December with the stalling of the fourth term collective labour agreement talks between the union and functionaries of the İZBAN organization, one of the main urban transport arteries in Izmir. At İZBAN, the country’s largest rail public transport system which provides a service on the suburban line between Aliağa-Selçuk and connects with the airport, 343 workers, consisting of drivers, advanced technicians, technicians, station operators and booking clerks, came out on strike.

What İZBAN workers are demanding is to receive pay close to the remuneration obtained by rail transport workers in other provinces and to have the same rights. İZBAN workers, who are calling for a 28% basic wage hike, a 112-day bonus and increased fringe benefits, also want driving and shift allowances to be included in their collective agreement. A fresh offer whose details still remain unknown was proposed to the workers yesterday evening. Had the strike continued, the workers would have decided whether to continue the strike by voting today on the offer that was made.

QUESTIONS RAISED OVER NON-SUSPENSION OF STRIKE!

Many accusations have been levelled at the İZBAN workers over the one-month strike. While neither İZBAN partner heeded the workers’ just demands, Turkish State Railways remained silent as these events unfolded but İzmir Metropolitan Municipality’s stance towards the strike in particular was one of setting the workers against the people. Heading the accusations was that of “the strike continuing prior to the upcoming local elections.”

With İzmir Metropolitan Mayor Aziz Kocaoğlu saying, “There is a right to strike but doing this in İzmir alone brings various subterfuges to mind,” CHP İzmir members of parliament branded the strike political and as being a local election stratagem on the part of the AKP. With the workers accused of being AKP partisans in posts made on social media, questions were raised over the non-suspension of the strike with it said, “It would have been suspended had it been in Istanbul or Ankara.”

AKP’S İZMİR CANDIDATE ZEYBEKCİ SAYS, “IT WILL END IN THE SHORTEST POSSIBLE TIME”

In a post he made on his Twitter account yesterday, the AKP’s candidate for İzmir Metropolitan Mayor, Nihat Zeybekci, said, “I am receiving messages coming from my fellow city dwellers about the #İZBAN problem that is turning the traffic to torment and transport into an ordeal and I am personally experiencing each moment. We will not permit this suffering to continue. This torment will end in the shortest possible time!”

President Tayyip Erdoğan criticized the CHP’s approach to municipal management and defended strike bans in a speech he made to the AKP Istanbul Provincial Chairship Organization Meeting held at the Haliç Congress Centre on 30 December 2018, and said, “The events known as strikes vanished in our presence.”

Erdoğan responded as follows to the comment by former Istanbul Municipal Mayor, Nurettin Sözen, “Rather than living in a society without strikes, I would prefer to live under democracy along with heaps of rubbish and under an order that has unions and collective agreements and has strikes:”

“Mr Sözen made a comment. It greatly attracted my interest. The CHP mayor before me of Istanbul. To the criticism raised, Nurettin Sözen makes a comment that draws attention to the explosion at Ümraniye rubbish heap. I was indeed saddened. Just look at the state of things! There were strikes at that time and the rubbish heaps were due to this. You presumably don’t live in Istanbul. Or are you in space? There is a dirty great rubbish storage area in Ümraniye. How did you as the metropolitan mayor permit that dirty great rubbish storage area? How did you let it come about? Give account for this first. But the CHP means rubbish, rubbish heaps and air pollution and, along with all this, the CHP means lack of water. Or, Mr Sözen, are you going to wash Istanbul’s water shortage with strikes again? What kind of calculation maker are you, what kind of professor? This is their very mentality and logic. What happened? We came. Was any rubbish left in Istanbul? The events known as strikes vanished in our presence.”

Erdoğan continued, “You as a politician will make the events known as strikes vanish. There was a strike because you didn’t grant entitlements. Now there are no strikes. If there are no strikes, it means you are granting workers’ rights and obeying the law. This is how strikes are minimized. They come to a minimum. A strikeless society comes into being. There is a strike on İZBAN in İzmir. Come on, then, why aren’t you settling it? Strikes are part of the CHP logic. It praises itself over them, you see. Living with them invokes pride for them. Well, OK. That is an ordeal for the people. The CHP is an ordeal. But we have not made our people suffer such an ordeal. We have not made our people suffer such oppression. We have not imposed lack of water, air pollution or rubbish on them.”

Strike at Süperpak ends in workers’ victory after 186 days