Earthquake debate amidst an “accident of fate” and separatism

A further dimension of the power holders’ demeanour towards the earthquake then manifested itself in the speech President Erdoğan made following a funeral service he attended in Elazığ. He considered the earthquake to be an “accident of fate". 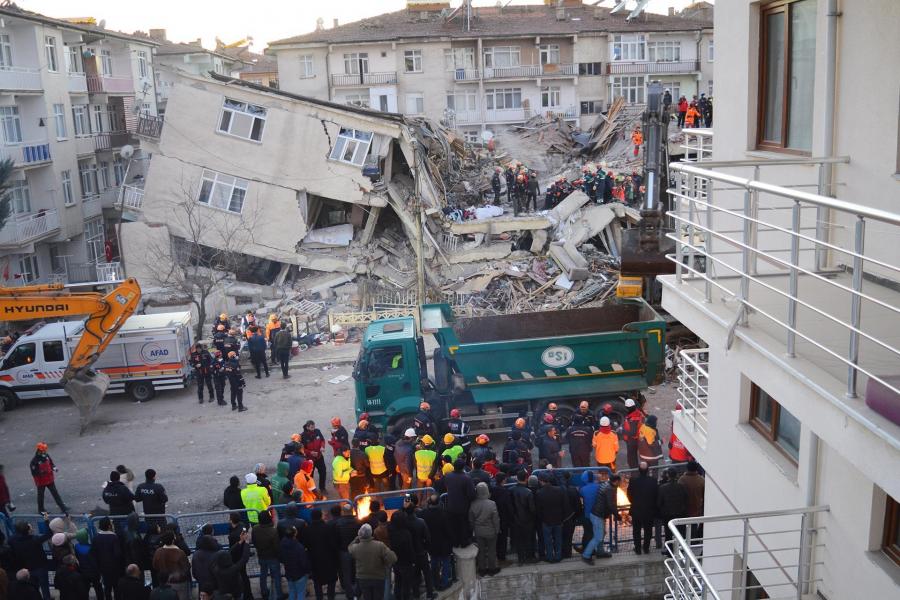 With the number of deceased as of yesterday morning in the 6.8-magnitude earthquake centred on Elazığ-Sivrice on 24 January standing at 39, the number of injured was stated to be around 1,500.

The debates that accompany earthquakes of a degree that arouse national-scale excitement are once more taking place.

The impetus for the debate came with the message Red Crescent President Kerim Kınık made on his social media account in the immediate aftermath of the earthquake, “We are sending the materials to the region needed to protect our citizens in the region from negative conditions. Enter Earthquake and send an SMS to 2868 for your support @Red Crescent. Contribute ₺10.”

Citizens were justifiably irked by this message and justifiably asked what happened to the money that was accumulated (in an amount varying from 40 billion to 66 billion) by way of “earthquake tax” imposed in the wake of the 17 August 1999 earthquake.

Interior Minister Soylu, however, countered these reactions by launching investigations into these people! Actions of this kind from people in the highest aid-giving office at a time when citizens were awaiting aid from them in an earthquake also came as a manifestation of the power holders’ mentality. It was as if citizens’ expectations of the Red Crescent was for a bit more money to go into the Red Crescent’s kitty or for reactions displayed on social media to be silenced!

WHAT REALLY MATTERS ARE THE NECESSARY PRE-EARTHQUAKE PRECAUTIONS

A further dimension of the power holders’ demeanour towards the earthquake then manifested itself in the speech President Erdoğan made following a funeral service he attended in Elazığ. Erdoğan actually considered the earthquake to be an “accident of fate.”

Saying, “Of course, disasters of this nature are big tests for us. And, in this regard, we have always provided the most splendid examples of the submission at this point of being Muslim… Now we are once more being tested,” the President sees the earthquake as being a test devoted to God’s rules, rather than being an issue of natural disaster and surmounting this disaster with the least harm, and thus promotes the issue as being at heart “bowing and submitting to God’s will.”

The mentality that, rather than using the fruits of the experience and knowledge of dozens of earthquakes to prevent the loss of life and destruction that earthquakes cause, presents this as God testing his slaves and responds with “submission,” saying, “There is auspiciousness in what has happened,” has zero chance of successfully taking the measures necessitated by a large natural disaster like an earthquake.

The President did not stop at this. He responded to those who spoke of the extent of the destruction in the earthquake being due to the failure for the necessary precautions to be taken by stating, “Earthquakes are not known in advance and precautions are impossible.”

In fact, no critic asked, “Why did the earthquake happen and why did the power holders not prevent the earthquake?” The questions posed and criticism made was entirely on account of preparation not having been made for the earthquake using the fruits of science and earthquake engineering!

In response to the criticism, Soylu and AKP spokespersons are engaging in propaganda that says, “We must all be in unity and togetherness in the face of this calamity.”

This is the propaganda, but the truth is totally different.

This is because the power holders by now consider themselves to be the “country’s owners” and do not want anybody apart from themselves to get into the region.

The most striking example of this was the denial of entry to the city of two truckloads of aid materials that the HDP Ergani Municipality had brought. Police officers, declaring that they were unable to admit to the city trucks that had set out from Ergani and contained such materials as food, nappies, tampons, torches, bread and water, said aid apart from aid by Disaster and Emergency Management Presidency (AFAD) teams would not be accepted. However, not only was aid emanating from such municipalities as Ankara, İstanbul, Adana and Mersin accepted, but no objection was felt to these municipalities’ search and rescue teams participating in efforts in the region, even if they were treated with disdain.

This means that the HDP and the HDP’s local authorities, and hence the citizens who vote for the HDP, are not perceived of as falling within the unity and togetherness.

And this is indicative of the point the Erdoğan-AKP administration has reached in discriminating among peoples.

With the people, be they Turkish, Kurdish or Syrian, uniting in the face of disaster, the provincial governate’s position that rejects the HDP’s aid shows who the real discriminators are and the stage real separatism has reached.

Scientists, earthquake engineers and experts speak of the precautions that need taking. And these debates will most certainly continue in the days to come.

Turkey is an earthquake country and we have witnessed examples of significant solidarity in the great earthquakes that have often been experienced.

And in this most recent earthquake, we made the acquaintance of people like National Medical Rescue Team (UMKE) officials Emine Kuştepe and Syrian Mahmud who displayed great effort and courage to help earthquake victims. We witnessed UMKE and AFAD’s officials remove 45 people from beneath the rubble with great effort and skill and, as the days pass, we will witness further examples of solidarity and assistance.

For, the peoples of Turkey have succeeded in moving into action at times of disaster with the spirit of solidarity and assistance.

Yes, in every earthquake we have seen the extent of the sacrifice neighbours have made to save the lives even of people totally unknown to them and what they have achieved. This is how it was in the Elazığ earthquake and we will see this in times to come.