Detained Peace Academic Tuna Altınel talked to Evrensel: Bully for me if I was able to cover a tiny bit of ground

Associate Professor Dr. Tuna Altınel, who is one of the academics to be prosecuted for signing the “We will not be party to this crime” declaration and has been detained, says with refence to the declaration, “I’m proud to be part of it.” 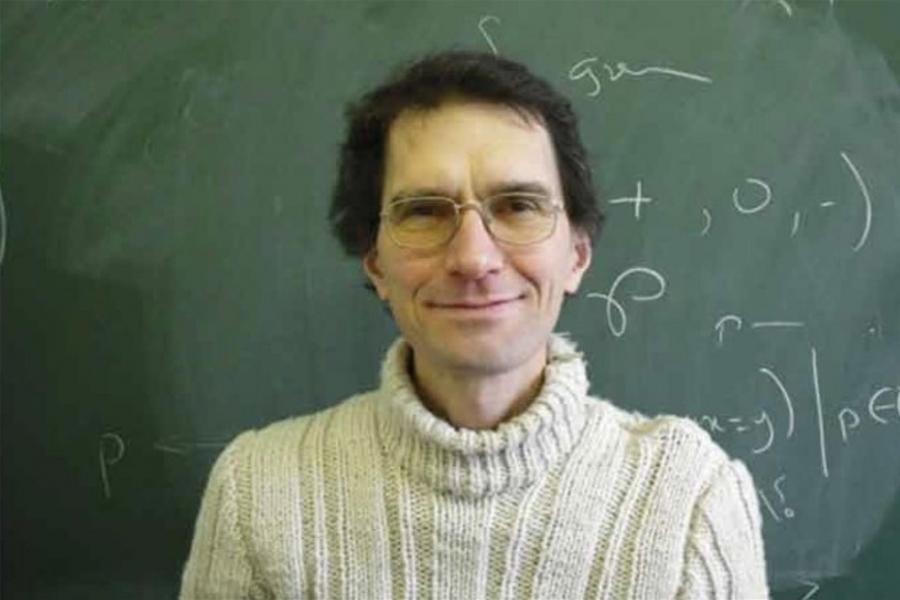 Detained peace academic Associate Professor Dr. Tuna Altınel replied to our questions prior to the first hearing at which he will appear on 30 July. We discussed various matters with Altınel, whom we spoke to via his attorney, ranging from prison conditions to the peace declaration and his thoughts about the future.

Associate Professor Dr. Ahmet Tuna Altınel, a faculty member of Lyon-1 University and one of the academics being prosecuted on “terrorist organization propaganda” charges for having signed the Academics for Peace declaration titled “We will not be party to this crime,” was detained on account of a lecture he gave in France. Altınel, who was arrested and detained one day later in Balıkesir where he had gone on 10 May 2019 to obtain information about a restriction on his passport, has been in Kepsut L-Type Prison since that day. He thinks Turkey’s future will not be easier than today, says, “We must continue undaunted” and adds, “If I need to stop in some way and have the opportunity to turn and look back and can say ‘I was able to cover a tiny bit of ground,’ bully for me.”

First, please accept my commiserations, doctor. If we start with prison conditions, can you talk a bit about the environment you’re in?

Initially, I thank you for providing me with this opportunity for an interview. I’m staying in a dormitory along with thirteen inmates in the L-Type Closed Prison in Balıkesir’s Kepsut sub-province. The word “dormitory” might give the wrong impression so let me convey one or two details. The place we’re living is a two-storey boarding house. On the ground floor there’s a common area and there are two rooms, toilets and showers. There’s also a courtyard adjoining it. The top floor is accessed from an eighteen-step staircase. There are five rooms on this floor. There are two bunk beds in each room and just now two inmates live in each room. Everywhere in the closed space is accessible twenty-four hours to everyone. Going out into the courtyard is possible from about 7.30 am to about 7.30 pm. Meals are eaten in the common area on the entrance floor. Those who wish to can do this in their room or another possible area. Lunch and dinner are prepared in bulk while breakfasts are very light. There’s a system that impels people to buy breakfast materials from the canteen, like it or not. The other meals are not bad. But they are very oily having too much carbohydrate and very little protein. It’s also possible to order fruit and vegetables, know as the “external canteen” in prison jargon. Slips for this are given to the administration every Tuesday. If there are no hitches, what’s bought from the things asked for is handed out on Fridays. Hitches happen. There are times when the administration itself gives out vegetables. Access to reading material at the prison is pretty good from certain viewpoints. For example, alongside the mainstream media such as Cumhuriyet or Karar (if any such thing is left, of course), no issue is made over Evrensel and Birgün. There’s a library full of nice surprises. On the other hand, I’m consumed with the thought that special effort is frequently made to complicate our lives. I suppose the basic problem is that we’re in a penal execution system that denies we’re human.  Yes, people live under E-10. I used the term “inmate” with regard to their status under the law. Were I to go into a bit more detail, there are five detained, myself included, and nine convicted people. There is a type of dormitory known in prison language as “independent” or “neutral” where E-10 politicals stay. The reason each one of the dormitory inhabitants is here is the problem about which some say, “There’s no such problem” but I for my part see as being the country’s most fundamental problem. And, I think if this country were more peaceful, more just and more democratic none of us would be here. We numbered thirteen in total when I entered prison on 11 May. We’ve been through one release and then two new “staffers” came and we attained our current number. We’re a fairly young bunch. I’m the oldest in the dormitory. I’m in my fifty-fourth year. One more of the mates I’m currently together with is of the same age. He’s been in jail for seven years. More correctly, in jails. An inmate aged 42 comes next. We’ve served the least time. The other mates are aged between 22 and 32. There are some who’ve done at least ten years’ jail time among that young bunch.

Each of my dormitory mates have their different story, their stories. I’ve listened, listen and will listen to each one. They’ve been comrades, guides and instructive to me. They show more with each passing day how meaningful the struggle we try to contribute to is. They can never be rewarded.

Had you thought that the Peace Declaration could have had such an effect and grabbed such attention?

I guessed that the Peace Declaration would elicit the harshest of reactions from those at the top of the state, and the signatories would be singled out and suffer duress of different kinds. But the word “academic” entered our politicians’ language following the brave show these two thousand or so people put up and has not receded since. I hadn’t expected this and I’m proud to be part of it.

The novel “Uncle Petros and Goldbach's Conjecture” by Apostolos Doxiadis, which speaks of mathematical geniuses devoting their lives to the pursuit of a problem, influenced me greatly. Your manner of defending the text in the trial conjured up this situation for me. Would you describe that decision of yours to sign this text in a few sentences by way of summary?

Devoting one’s entire life or a small but important part of it to a problem is also a characteristic, not just of geniuses, but of average but profession-loving, living mathematicians like me. I’m sure every person who experiences this sense of devotion to any work also leads a similar life. I had spent five days in Diyarbakır a few weeks before the Peace Declaration and I had stayed at a hotel in the section of Sur that was blockaded. I made the acquaintance of and spoke to people of different profiles, I sensed the atmosphere and in a way experienced it. At that time, more than one hundred intellectuals came to Diyarbakır on 30 December 2015 and held meetings. They marched in Melik Ahmet Street and they also read out a declaration. I had the opportunity of observing the disappointment the declaration imposed on those from Diyarbakır who had prepared this get-together. The anxiety to criticize all parties equally in the declaration was the chief reason for this disappointment. There was no such problem with the Peace Declaration that came in its wake. It was conscious of where the pleas and criticism had to be addressed and did so openly. Let me end my reply with a quote from my defence: “I did not just sign the Peace Declaration. I thought it, felt it and lived it. I am behind every sentence of it.”

Word from the prison you’re in includes such things as you giving French and English lessons in the mornings and learning Kurdish in the evenings. How do your days pass there?

My days are actually pretty full. On days on which there are no interruptions that are demanding in time terms such as visitations and lawyers’ visits, I have a more or less established routine. I get up early in the morning and exercise. Then there’s cleaning, breakfast and the morning count. Care is taken to keep the dormitory quiet from twelve midnight until twelve noon. I work until noon. My work may consist of studying law in view of my two trials, preparing language lessons and reading and writing Kurdish. There is the evening count as 8 pm approaches. Then I have dinner. That usually happens on my own. The evening serving comes at around 5.30 pm and is handed out. I look at the papers (Evrensel, Birgün, Cumhuriyet, Karar). I return to my work. My students ask questions even if outside lessons and I try to assist. Their excitement, desire and ability to learn also encourages and strengthens me. We shake the walls around us by joining hands. Perhaps one day we’ll manage to knock them down entirely.

“ARE TUNA AND ZEKI EQUAL BEFORE THE LAW?”

What if I ask about the relationship between your prison days with a mathematician’s systemism? Are there anecdotes you can pass on from this point of view?

I have not until now yet dealt with prison life directly with mathematics. But I have had the opportunity to see the benefit of certain forms of thinking and going about things that come from doing mathematics. The example of this I encounter most frequently is language lessons. I think I can get grammar across more systematically and easily. My students have noted on several occasions that they grasp it more quickly, too. Anecdotes? Even if not directly to do with mathematics, there’s a story that comes to mind in this context. Having done a mathematics doctorate, the word “doctor” is frequently pronounced along with my name. An inmate with health problems thought I was a physician and would pose health-related questions. And I, by way of joke, would say, “My science is different.” Then, with a report about “mathematics associate professor Tuna Altınel” appearing in a newspaper, he came and said, “Doctor, I thought you were a medical doctor.” Of course, not just anecdotes happen in jail. There are various and very serious problems. I will let you into one that moves me greatly. The crux of the problem is the moving of detainees to very distant provinces with video links as a pretext. Hundreds of kilometres are traversed between defendant and their attorney and the right to defence is restricted in a very severe way. Let me give an example. Zeki Kolcuoğlu, with whom I share my room, is from Silopi. His family is still there. He has a very sensitive case. It fluctuates between Articles 312 and 314 of the Turkish Penal Code. His trial is being held in Cizre and his attorney is there, too. Nobody is trailing here and back. Zeki is trying to manage the trial with a ten-minute phone call he has with his family once a week. Are Tuna and Zeki now equal before the law?

How do you see Turkey’s future in terms of the struggle for peace, justice and democracy that took you as far as Çağlayan and Kepsut Prison while teaching in Lyon in France?

A future awaits us that is not easier than the period we’re living through. We must continue undaunted. If I need to stop in some way and have the opportunity to turn and look back and can say “I was able to cover a tiny bit of ground,” bully for me.

Do you have a message to send from the inside to the outside – however outside the box - before your first hearing slated for 30 July?

The election defeat of Erdoğan, the counter offensive and the line of struggle!