The police attacked Genel-İş trade union members who were protesting the objection to their union’s competence in front of İzmir Municipality. 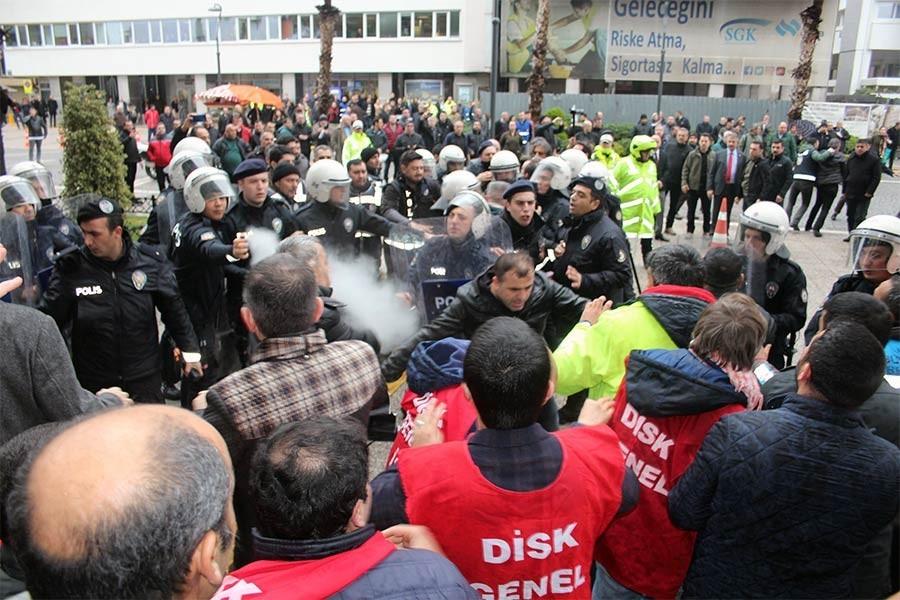 The police attacked a protest which Genel-İş trade union members wished to hold at the entrance to the mayor’s office in connection with the collective agreement. The police used truncheons and tear gas during the attack. At least fifteen workers were arrested in the course of the attack. Genel-İş staged a work walkout in İzmir. Hundreds of workers walked out of work and congregated in front of the town hall.

The objection that İzmir Metropolitan Municipality has made to the competence of Genel-İş İzmir Branch No 2 that is organized at İZENERJİ was to be protested by the union in an action slated for today. The workers, having congregated in the morning hours in front of İzmir Metropolitan Municipality, set out on a march towards the mayor’s office entrance with the banner: “We will not permit the usurping of our collective agreement right.” Administrators from other Genel-İş-affiliated branches also attended the reading of the statement.

It has been leant that fifteen Genel-İş-member workers were arrested, including branch administrators and shop stewards. Despite the police making a special effort to arrest branch chair Arif Yıldız, the workers did not permit this. It has also been heard that the police threatened the workers following the intervention and made announcements that, “The action has ended.”

WE’LL ALSO DENY THE EXISTENCE OF THOSE WHO DENY OURS

Making a statement following the attack, for his part, Confederation of Progressive Trade Unions-affiliated Genel-İş Trade Union Branch No 2’s Chair Arif Yıldız signalled that they would continue the struggle:

“We were deprived in an antidemocratic manner of our struggle to gain our rights and right to make a press statement and we met with police violence. Is this your advanced democracy? You promised. Keep your promise, Aziz Kocaoğlu. You toyed with us for ninety days speaking of finding a resolution today and withdrawing the objection tomorrow. You have objected to our collective agreement competence. If you deny our existence, we’ll deny yours, too. Don’t deny the existence of workers and wage earners. We’ll continue our struggle in the streets and open spaces. Our struggle will continue until our arrested friends are released. We will also make our press statement. Come, if you dare, and take us all. We are not just the İZENERJİ workers. We are hundreds of thousands of workers throughout Turkey.”

Summoned by the branches, hundreds of Genel-İş-member workers assembled in front of the İzmir Metropolitan Municipality town hall and representatives from Confederation of Public Employees' Trade Unions-affiliated unions, the administration of İzmir Bar Association, CHP Izmir MP Kani Beko and representatives from EMEP, HDP and many mass organizations also took part in the action.

The police were defeated in their effort to prevent the assembly. Large numbers of rapid intervention and water cannon vehicles were assembled between the Metropolitan Municipality and Provincial Governate buildings. The workers frequently chanted the slogans, “We’ll chip away until we get our agreement rights,” “Long live class solidarity,” “Oppression will not intimidate us,” “We’ll win by forever uniting,” “Collective agreement not charity,” and “If there’s no work and bread there’s no peace, either.”

Workers who were unable to get to the town hall, on the other hand, held a work stoppage where they were. ESHOT buses came to a halt wherever they were located at 13.00. Buses did not operate for around one and a half hours. Municipal workers abandoned their work equipment wherever they were. A convoy of garbage trucks formed in Konak Square. In Çiğli, cleansing workers blocked the motorway entrance with garbage trucks. The İzmir-Çanakkale road was closed due to the protest. One of İzmir’s main arteries, Altınyol, was also closed to traffic by garbage trucks. The tow trucks sent into the area were unable to tow away the dustcarts.

IF THE PROBLEM IS UNRESOLVED WORK STOPPAGES WILL CONTINUE

Making a statement in front of the town hall, Genel-İş Trade Union Branch No 2’s Chair Arif Yıldız indicated that if the municipality did not withdraw its objection before the day was out İZENERJİ workers would hold a daily two-hour work stoppage wherever they were and on Thursday 17 January, by contrast, would halt work for a half day. Yıldız also spoke of a full-day work stoppage and the holding of a protest in front of the judicial complex on 31 January on which the proceedings brought in opposition to the objection would be heard. Yıldız also pointed to the resemblance between İzmir Metropolitan Municipality’s attitude towards workers and that of the government.

Branch Chair Yıldız read the press statement he was unable to read in the morning. Noting that there was absolutely nothing to prevent workers who had been brought onto the payroll by decree with the force of law benefitting from the administrative clauses of the agreement, Yıldız said, “So, who are managers of Republican People’s Party-aligned İzmir Metropolitan Municipality aiding with measures of this kind? What purpose is served by trying to delay the collective agreement rights of nearly twenty thousand people, their families included? What is wished for from the sweat of the brow of workers who have no other aim apart from increasing even if by a scrap the amount of bread on their dining tables under conditions of economic crisis that become more arduous each day? Why is there opposition to workers who have moved onto the public payroll from being subcontractees having collective agreement rights and benefitting from the administrative provisions? Is İzmir Metropolitan Municipality management opposed to workers enjoying trade union rights? What aims are being served by stoking up strife and crisis with the workers and wage earners of İzmir prior to the local elections?”

Stating that they would not accept İzmir Metropolitan Municipality’s proposal for workers who had been brought onto the payroll by decree to be excluded from the collective agreement, Yıldız commented as follows:

“If we as a union came onto the street today, the reason for this is things having become intolerable, promises that were made not having been kept and the wish to usurp our trade union and collective agreement rights. We proclaim from here that our action here today is just the beginning. Until the competence objection is withdrawn, our union and İZENERJİ workers will from now on mount actions and struggle at all points throughout İzmir. Until the competence objection is withdrawn, İZENERJİ workers will from now on not give their all to their work. As of next week, all forms of struggle, including work stoppages, will be a democratic and legitimate right for us.”

Calling to Kocaoğlu, Yıldız asked for the objection to be withdrawn and for collective agreement negotiations to start at once.

ALIAĞA LABOUR AND DEMOCRACY PLATFORM: WE ARE AT THE WORKERS’ SIDE

The Aliağa Labour and Democracy Platform condemned the police attack on the İZENERJİ workers. Stating that the arrested workers should be released at once, the Platform said, “We condemn the police intervention staged against the press statement of İZENERJİ workers who are organized in Genel-İş Union’s No 2 Branch, whose competence to make collective agreements is being objected to in an arbitrary manner, and reiterate that we are at the side of workers who are standing up for the right to engage in collective bargaining.”

The Confederation of Public Employees' Trade Unions condemned the attack staged on Genel-İş Union members in İzmir and called for the arrested workers to be released at once.

The statement, which notes that the Genel-İş Union’s demand is not peculiar to İzmir Metropolitan Municipality, indicates that the union has recently signed collective labour agreements covering workers who transitioned to the payroll by decree at many municipal companies.

Hence, the statement, which stresses that the police attack and arrests directed at administrators and members of Genel-İş, which is organized at İZENERJİ, actually target the right to job security of workers who have been made internal to companies under decree, noted that the competence objection proceedings that have been brought will take months to be concluded. Recalling, for example, that the competence objection at İZELMAN took thirteen months to resolve, the statement read, “This state of affairs means workers being employed at the same pay until the completion of the agreement under conditions in which inflation beats one record after another. We as the Confederation of Public Employees' Trade Unions condemn the attacks made on workers struggling for just demands, call on those arrested to be released at once and state that we are in solidarity with İZENERJİ workers. We invite İzmir Metropolitan Municipality to lend an ear to the just demands of workers and the union and to withdraw the objection that amounts to a continuation of the subcontracting mindset.” (EVRENSEL DAILY)