Ayhan Bilgen: The CHP and Good Party must take the HDP electorate into account

Ayhan Bilgen: The ruling entity will either secure its continuation after the local elections through easing up or fracture from becoming even harsher 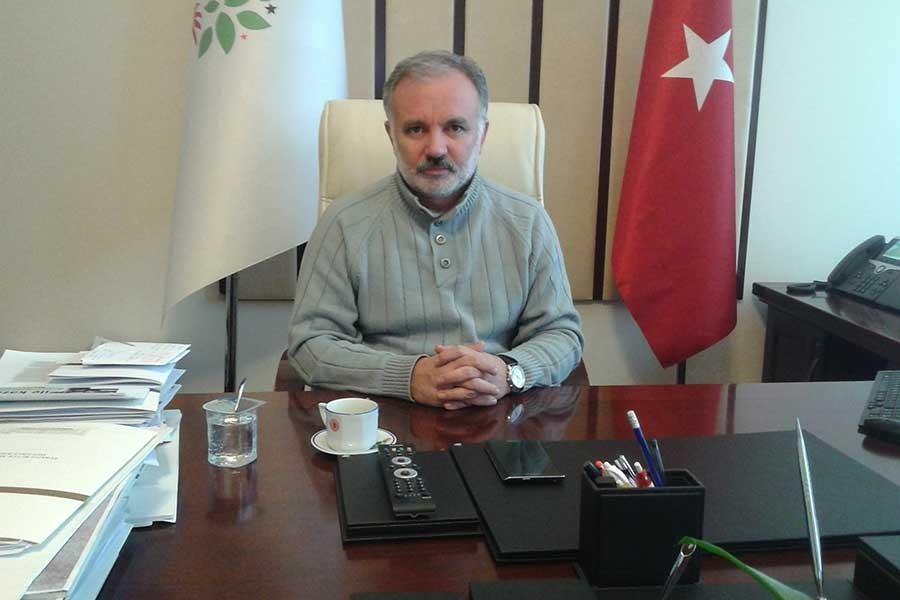 HDP Group Deputy Chair Ayhan Bilgen, whom I spoke to about important current developments from parliament to the local elections, stated that following the local elections the ruling entity will find itself at a junction which we can sum up as entailing either easing up to secure its continuation or fracturing from becoming harsher. Noting that the consideration given purely to nationalist-right votes on the CHP-Good Party front is tantamount to ignoring the expectation for change in society, Bilgen said, “This election may also result in a reshaping not just of the governing forces, but also of the opposition.” As regards Binali Yıldırım standing for Istanbul Metropolitan Mayor without resigning as parliamentary speaker, Bilgen said this may be a contrivance to bring in someone else as mayor after Yıldırım has been elected.

There has been great debate about the function of parliament after 24 June. What have the six months until now shown?

The separation of powers does not mean the breaking off of powers. What counts here is each organ performing its function without coming under duress and interference from the others. In this sense, the legislature has two functions. One is for the legislative process to avoid coming under the executive’s duress and to supervise the executive. Parliament most certainly did not possess effective, productive mechanisms before, either. However, it now comes down to their having disappeared in formal terms as well. Laws are sent here from Beştepe and this place just approves and adopts them without even touching a comma. The sole remaining supervision-related mechanism is investigation motions. But there is no business that is approved in the general assembly and brought to a conclusion through the setting up of a commission. The further strengthening of parliament through the new system thus just amounts to propaganda by the ruling entity.

Binali Yıldırım has become the AKP’s candidate for Istanbul Metropolitan Mayor without standing down as parliamentary speaker. We have seen many examples of the ruling entity flouting the law. Will this also be put into effect as with the previous instances?

We criticize the present Constitution, too, and wish for democratization. However, this absolutely does not authorize anyone, and certainly not the executive, to flout this Constitution. If you want the parliamentary speaker to engage in politics, you will amend the Constitution and create the perception of the rule of law at least in formal terms. The law says that the parliamentary speaker cannot engage in any political activity but there is no sanction. However, if his resignation has not taken place the moment he applies to stand on 17 February, the Supreme Electoral Council (SEC) must then intervene in the process. Of course, in this regard, the extensions of tenure on the SEC speak volumes in terms of timing.

THEY MAY GET BİNALİ YILDIRIM ELECTED AND MAKE SOMEBODY ELSE MAYOR

Well, why do they knowingly opt for this?

Two things are possible. It may be the attitude of, “We’re powerful and we’ll do what we want,” just as in many previous issues such as immunity, the impartiality of the president, etc. Secondly, other calculations may lie behind this technical question. I cannot say that the parliamentary speaker is doing this but some people may be involved in this plan because, if he is elected, the SEC, as far as we know from past practice, shouldn’t grant him a certificate of election. They may be contriving to elect a new mayor from within the assembly or through their alliances following the non-granting of the certificate of the election due to the flagrant violation. I have no idea if Mr Yıldırım would prefer this or deem it correct in terms of political ethics. However, if he knowingly does not resign, it means he has acquiesced in this course of action.

Comments are also doing the rounds of a failure to win Istanbul and that, if we also consider Ankara, they could not find a candidate. Do you agree?

The political aspect of the affair warrants a great deal of discussion but what I want to emphasize has to do with the legal dimension of the affair. Consideration may have been given to the balances if he is unelected, or to the risk of the parliamentary speakership election before the election.

Of course, in political terms, the AKP’s Ankara candidate warrants attention. It was previously implied that the mayors in certain sub-provinces of Balıkesir, Bursa, Ankara and Istanbul have Gulenist connections. So, Ankara Metropolitan Mayor Melih Gökçek has Gulenist connections, but Özhaseki doesn’t? It is totally ridiculous to believe this because, in all the files in Kayseri, well-known names in the business world openly recount how Özhaseki acted as an intermediary for them and organized Pennsylvania visits. On the other hand, it comes across as odd for the MHP to give signals suggestive of great insistence over the political wing of the coup attempt but, on the other hand, to act as if there is nothing doing when it comes to somebody like Özhaseki. I think these political manoeuvres will give rise to a massive crisis in domestic politics. The practice of the new system, especially as regards parties and alliances, exceeds the potential for a system to sustain itself.

What I’m driving at is that in the old system, even if there was no legislation on interparty alliances, the parliamentary system was open to coalitions. The presidential system, conversely, came in with the assertion to the absolute contrary of eliminating coalitions. This system envisages a bipolar order. Here, if there is no divergence based on social reality, alliances and relations between parties may backlash at the ballot box and in the street. I don’t think the masses will follow suit because headquarters so decided. Cooperation between parties is based on the politician’s own fancies and not social demands. However, if the voter doesn’t like the candidate they may not say “yes” to the person the general chair wants, and this is how it appears in the polls I’ve consulted.

You have formulated your strategy in the local elections as being “alliance with the Kurdish parties in the region, while in the west, support for the forces of democracy to push back the single-man regime.” What is the latest state of play? Has the course you will follow particularly in the western metropolises taken shape?

Of course, serious difficulties stand in the way of implementing this. If the opposition block acts as a whole in strong solidarity – the CHP and Good Party are making partial agreements to this effect – you have to work things there in a way that will embrace the entire electorate. A hair’s breadth separates winning and losing in many towns. So, if you say “I will ignore this body of voters; their votes are in the bag, anyway” – I am saying this with reference to the HDP electorate - if an equation is set up in the form of two alliances in the local elections, you need to consider what it takes to get votes from the HDP electorate.

On this point, the HDP will determine whether to field candidates with regard to the demands of the forces of democracy. This is a matter of perceiving the social expectation that transcends the decision taken in party committees. If you do not take this expectation into consideration, you cannot blame anyone when you lose the election, because, from among the parties in parliament, it is the HDP electorate that attaches the greatest importance to their party’s decisions. If the only calculation is how the nationalist-right votes will behave, the expectation for change will not have been taken into consideration. You pay heed to the fact that 60% of Turkey is inclined towards right-wing parties but this does not mean you will capitulate. This election may also result in a reshaping not just of the governing forces, but also of the opposition.

SIGNALS OF LONG-TERM CHANGE IN POLITICS

Many elected people, such as MPs and mayors, have been thrown in jail. Prior to the local elections, the President made threats about curators. What kind of road map lies in front of the governing forces?

On one of its dimensions, democracy is a regime of entitlement by paying the price. Certain sections of society have for years suffered constant oppression and discrimination on the basis of their ethnic identity, faith, poverty or sex. The decisiveness of these segments will undoubtedly determine Turkey’s political future. However, the victimhood of segments that have until now not been wronged to this extent will accentuate matters. We have seen segments that in the past availed themselves of the governing force’s favours falling victim in recent years. The increasing share of the cake taken by the top income group, the economic problems of the middle classes and small business people ... these all signal long-term change in politics.

IT IS INEVITABLE THAT SOCIETY DESIGNS POLITICS

I am of the opinion that we will in the near future encounter a situation in which the ruling block will either in some way ease up and quell this reaction by taking steps backwards or the reckless disregard of social expectations and intervention will lead to a redesigning of politics. In a period in which means of communication cannot be controlled to this extent, you err if you reckon on politics designing society because it is inevitable that society designs politics. And if the opposition is a bad impersonation of the governing party, it will lack the chance of creating this hope.

You started local election campaigning in Kars the day before yesterday. Is there anything you would like to say about Kars?

The previous mayor was from the MHP and he left his party. Kars is an important place for the HDP in view of its pre-12 September opposition and tradition and also its various groupings. We think these elections have provided an important opportunity for change in Kars. In the last election very little separated the AKP’s and our vote in Kars. We don’t know what kind of alliance the AKP-MHP will enter in this election in Kars. However, we think that confronted with this, the opposition will at least bring about a change that will create change on the street.

STEPS MUST BE TAKEN FOR GÜVEN

There is a word of Leyla Güven’s hunger strike reaching a critical state. The news is also coming in of hunger strikes in other prisons. Will you undertake fresh initiatives in this regard?

Leyla Güven has a demand concerning solitary confinement on İmralı and by this means the reopening of the page of peace in Turkey. The point we are at certainly entails great risks. I think in the Syria policy there will initially be a monitoring of the rising tension followed by an acceptance of this reality and a taking of steps. There is no chance of this business going forward with a mindset that forever deems the gains of the Kurds in Syria to be a threat. We want the hunger strike to attain its goals at once. Leyla Güven’s leadership is valuable, but those in Elazığ Prison who started before her are also in a critical way. We have previously experienced the way nothing can be brought back to its old state once prisons in Turkey erupt. There is no further talk of capital punishment and uniform attire as were mooted in a previous period. There are clearly those who are aware of the inherent danger. Those engaging in outdoor heroics may not be heedful of this, but everyone knows that this carries decisive force when the chips are down.