PETKİM workers in İzmir go on struggle despite the police attack

PETKİM (Petrochemical Holding) workers continue their resistance due to the deadlock in Collective Labour Agreement, despite the police attack. 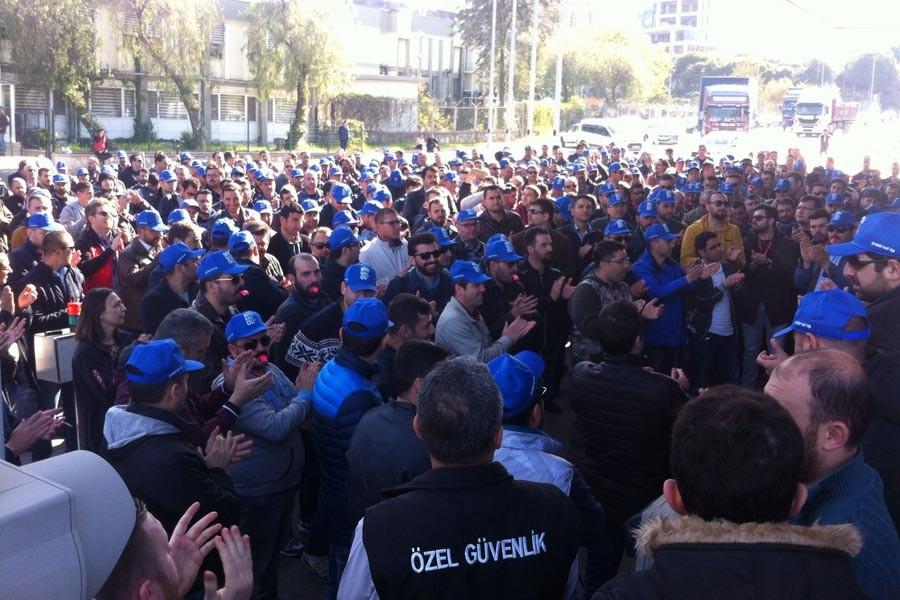 The reaction of the workers to the imposing attitude of the employer at PETKİM (Petrochemical Holding) has been strong. While the workers decided to take indefinite action, the boss decided to put card punching into practice. Workers, who previously just showed their cards to security to enter the factory, have decided to block the entrance of the factory with their cars. As the negotiations ground to a halt, workers that are members of Petrol-İş came to the factory to protest. They tried to get in but the employer demanded they punch their cards. Upon this, the union decided not to allow any vehicles in; workers blocked the gates and refused entry to all vehicles.

The chair of Petrol-İşAliağa branch, Ahmet Oktay, warned “We’ll be here until the contract is finalised. It does not matter how long it takes, even during Eid we’d be here with our families.” Oktay said “they motivated us. I have said in the meeting at the weekend that we are not responsible for what is to come. Our demands in contract negotiations were a wage befitting human dignity, a humane work environment and harmony in the workplace. They deem it too much for us and that is why we are here.”

WE WILL NEVER ACCEPT THIS OFFER

In stressing that they demanded an increase in the general wage increase and the removal of wage differences for the same work, Oktay said “2% increases over the first and second years should be 3% and 2% respectively. Their proposal is enough for us to be here and we will never accept this offer. Unless they come with a reasonable offer we will not sign this contract. They might think we’ll protest for a few days and disperse for Eid but we told our families that we’ll spend Eid here. We’ll go back to the table only when they are ready to meet our demands and work for harmony in the workplace.”

THE EMPLOYER VIOLATED THE CONTRACT

Workers transferred to PETKİM from Star Refinery owned by the same employer- are paid more than PETKİM workers doing the same job. Oktay said that this is causing tensions between workers and that it is a violation of the contract: “they talk to us about the law. They are trying to intimidate us with their emails. It is stated in article 41 of the contract that ‘The employer will determine the wages of new workers but it cannot exceed the wages of the employees with similar experience and responsibilities.’ Both parties have signed this contract.” Claiming that the employer has transported away from all products stored on site, Oktay said “They cannot get anywhere by smuggling the products we produced. These are shallow calculations.”

THE POLICE ARRIVED AT PETKİM WITH THEIR TOMAS

Riot police and TOMAs (Armoured Water Cannons) were positioned on the factory grounds. Security forces demanded that vehicles blocking the entrance be removed as it was claimed that they were a threat to safety. Union officials explained that the employer was the source of the unrest and there was nowhere else to put their vehicles; the police were asked to remove their TOMAs. There were arguments between traffic police and the workers; workers told traffic police officers to “issue penalty tickets if necessary but not to intervene.”

It was later agreed that TOMAs and workers’ vehicles be removed simultaneously. Workers’ vehicles had to go into the factory car park to then come back out but a factory director tried to stop them. Following arguments, workers decided against moving their vehicles.

Workers were critical of the management: “Why was the police called? No one here would damage public or private property. This is an attempt to put workers under psychological pressure.”

THE DISTRICT GOVERNOR MET WITH PETROL-İŞ

Aliağa District Governor Dr Bayram Yılmaz also met Petrol-İş management. Following the meeting, Oktay made a statement: “We have no problem with the police but the mentality that put them in front of us. We will continue our action here until they meet our demands. We will not give up until we win.”

In saying that they would only punch their cards and go in if the TOMAs are removed, Oktay said that he would continue working the night shift but also continue to protest outside and inside PETKİM premises. He finished his statement saying that those inside have already been working for 16 hours and that the employer would be responsible for any accidents. Workers continued their protest with the slogans of “unity, struggle, victory”, “Victory will belong to the resisting workers.”

Later in the evening, workers made their way into the factory following the removal of the TOMAs.

WHY DID THE NEGOTIATIONS REACH A DEADLOCK?

There is a difference of 16% between the wages of the older and newer workers in PETKİM; the union demands this difference be removed. The union wants a general wage increase of around 9%, similar to that given to workers at Star and TÜPRAŞ. The management at PETKİM caused the deadlock in the negotiations by stating that they will not discuss any items until the three-year contract is not accepted by the workers.