No transportation project, graft and politics are behind Istanbul Canal!

Istanbul Canal is not just a transportation route, but the locus of a struggle having important ideological-political connections against graft, the plundering of Istanbul and the Treasury. 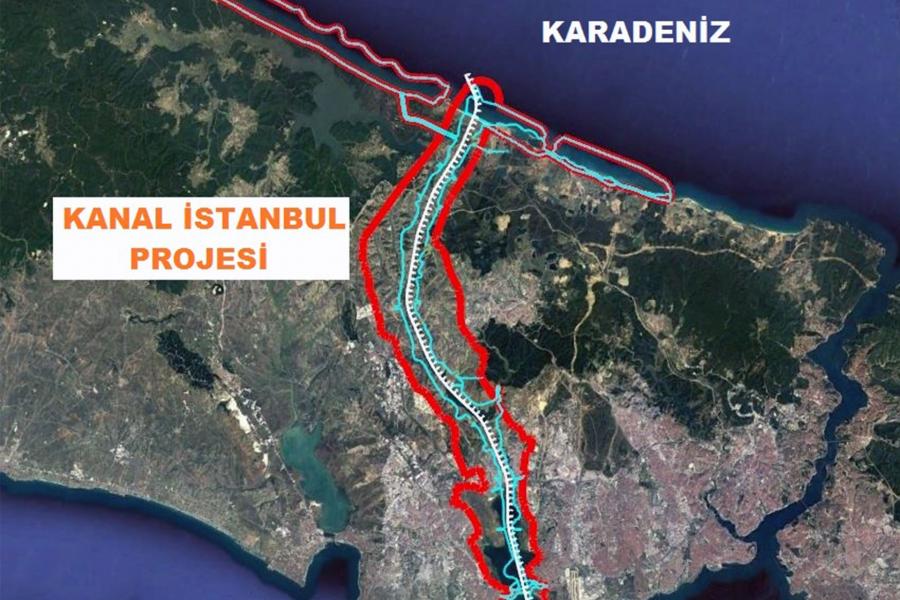 The “Istanbul Canal Project,” touted as Erdoğan’s “crazy project” prior to the presidential election, fizzled out over time. However, following the local elections, this “crazy project” has been brought back onstage as Erdoğan and his party’s challenge to the people of Istanbul.

In transportation terms, spending 75 billion to forge a canal alongside straits that constitute a natural transport route cannot amount to anything more than a “Heath Robinson” project. However, if this project is not one of transportation, it is a project that courts controversy by combining most serious issues from the environment to town planning and providing cronies with graft. But in this column today, I will address the issue from the perspective of the debate to which the Treaty of Montreux has been subjected of late.

Nevertheless, Montreux, signed in 1936 to remain in force for twenty years, has lasted until today as no country has objected to it.

Since it will furnish the USA and NATO with the opportunity to open up Montreux for debate, the “Istanbul Canal Project” is a project that will bring the greatest delight to the USA and NATO because Turkey, in bringing Montreux into debate so as to legitimize the Istanbul canal, will also have paved the way for Western imperialists to wriggle free from the restrictions of Montreux.

However, delving purely this far reduces the Istanbul canal project, along with the defenders of the project that has been oversimplified, to the level of classical collaborationism.

On the contrary, it is hard to get a handle on events without seeing the connections this project has for Erdoğan and the AKP with “neo-Ottoman,” “expansionist” foreign policy and the “world view” that will form the basis for such policy.

The academics and columnist who create the ruling power’s ideology in the crony media are clearly articulating this.

In their view, the Islamic world that will stretch from the Atlantic to the Pacific in the century (centuries) to come will be a rising force in the world, will be the dominant force in the new world order and Turkey will be the country that establishes this order. And Erdoğan is up for leadership when it comes to establishing this new world!

Hence, in their view, treaties like the Treaty of Lausanne and the Treaty of Montreux are treaties that were imposed on us by the big powers in the world in which the Ottoman Empire was dissolved and hamper Turkey from attaining its strength in the former Ottoman period, and, thus, new Turkey must fight to change these treaties!

In his piece dated 13 December, Yeni Şafak’s heavyweight columnist İbrahim Karagül, having said “In just such calculations of the major powers, Turkey has entered the stage as a new and strong player. Reading the shift of power on a global scale well, it has embarked on the struggle for existence in its own neck of the woods. It has replied with maps to the mapmakers,” has the following to say about Montreux: “They are petrified that Montreux will become ineffective with the Istanbul canal because this treaty limits our sovereign right over the Straits.”

(Nationalist) Patriotic Party Leader Doğu Perinçek’s utopia that the new world order will equate to China-Russia-Turkey’s rise has today also become the utopia of the crony scribes. Just by daubing this utopia in Islamist paint!

Imposing a regime on the peoples of Syria, the urge to interfere in the civil war in Libya, military bases set up in various countries, establishing schools and training missionaries for poor Islamic countries, billions of dollars spent on making mosques, endeavours to support Sunni jihadist forces and efforts towards ideological-political integration undertaken with the Muslim Brotherhood (al-Ikhwan) embody the reflection of this very mentality into foreign policy.

More to the point, when the Istanbul Canal project is viewed in conjunction with the Erdoğan administration’s foreign policy and the mission he has assigned to himself and his party, it becomes more comprehensible.

For sure, Erdoğan and his propaganda are portraying the Istanbul Canal as an affair that will liberate Turkey from the constraints the Treaty of Montreux imposes, and will continue to do so hereafter.

However, as has been noted all along, the truth is that the Istanbul Canal is in the limelight as a tool of the AKP’s foreign policy, for settling scores with the Republic and distributing graft.

The “Istanbul Canal” will thus undergo multifaceted debate in the coming days and there will not just be debate, it will also set the stage for a huge struggle between the people of Istanbul and those in power who do not recognize its will.

Taking a further step forward, we can say that, since, as well as being a project with environmental and graft implications, what is at issue is a “political project” having “ideological justifications,” it will play out as a struggle against the mentality behind the project of the peoples of Turkey, the forces of democracy and all circles that wish for Turkey to be the country of the fight for democracy and peace in the region.

This is because the Istanbul Canal is not just a transportation route, but the locus of a struggle having important ideological-political connections against graft, the plundering of Istanbul and the Treasury, failure to protect the environment, jihadism, conquestism and “expansionist” policies.