Evrensel’s history is, at the same time, also an archive of labour’s struggle. Evrensel is the pulse of Turkey’s struggle and the rostrum for endeavours to transform life to the good and beautiful. 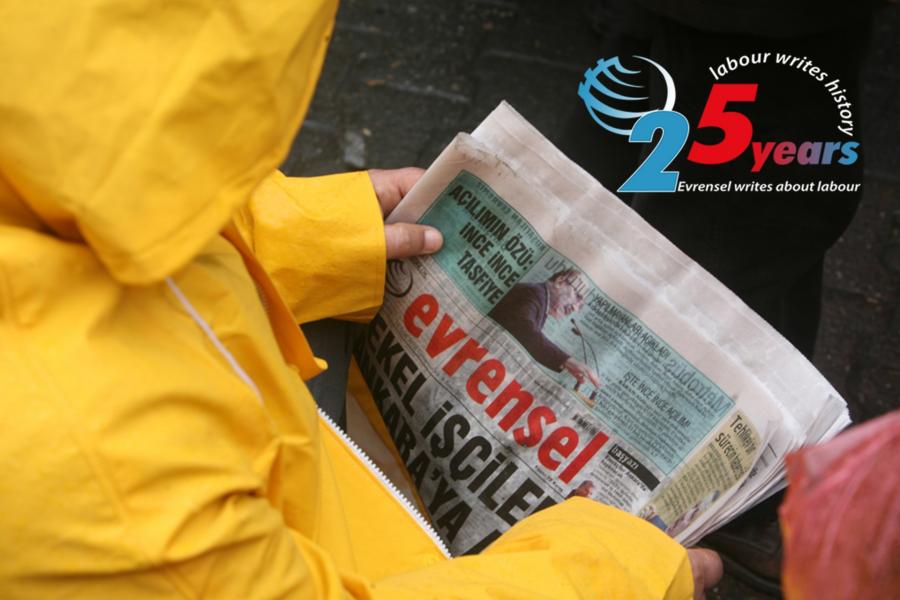 Having regaled its readers with its women’s, youth and book supplements, provincial and sub-provincial supplements, Sunday pages and website for its entire quarter-century publishing life, Evrensel is the pulse of Turkey’s struggle and the rostrum for endeavours to transform life to the good and beautiful.

“Read all about it.” The photograph depicting a screaming kid with a pile of papers under his arm is unforgettably emblematic of our press history. That’s how the evening editions of newspapers used to be sold in streets where the crowds passed and the thinking was, “If the paper says so it’s true.”

Now, however, research points to a daily diminishment of popular trust in the media. There is certainly nothing new about times in which newspapers print lies and sell lies. In the old days, too, newspapers refrained from imparting facts which the people needed but ran contrary to the bosses’ interests. Nevertheless, we have for a long time been in a period in which very few newspapers write the truth.

It does not suffice to be honest alone to be capable of not deceiving the people even on a single day. And, under conditions in which writing the truth is forbidden, this is actually more or less impossible.

To write about rampant corruption by those in power, politicians and civil servants, about the interests served by the methods capitalists employ to further exploit workers and labourers more each day and about the wars that pit peoples against one another means you also have to risk paying the price.

Having faced closure, duress and fines for printing the truth and having its reporter Metin Göktepe killed by the police, Evrensel is a newspaper that has paid this price in excess and will continue to do so.

SO, WHERE DOES EVRENSEL DRAW THIS STRENGTH FROM?

Evrensel is the voice of labour, the sole force that makes history and is capable of creating positive future-oriented values. This means it is a paper that draws its strength from the working class and the labouring popular masses and, simultaneously, has the characteristic of representing all the positive values of human history. It is not for nothing that the newspapers that draw their strength from the bourgeoisie and capital and serve their rule defend values mired in Medieval darkness and propagate the culture of barbarism and hate despite the exceptional facilities by way of communications technology they wield. As the paper of a class that represents evil you cannot do good and righteous things!

The worker’s daily Evrensel embarked on its publishing life on 7 June 1995 in an environment in which cursing socialism was in fashion, the assaults on workers and labourers’ attainments named “neoliberalism” had become widespread throughout the world and workers’ resistances to these assaults were taking place in many countries and in Turkey.

The capitalist press was producing copy that legitimized the assaults on the working class and tried to win acceptance for them among the labouring masses. By contrast, Evrensel newspaper set out in the face of capital’s domination of the country and media to engage in journalism that was based on the working class’s scientific world view and addressed events in Turkey and the world from the point of view of the working class’s struggle against the bourgeoisie. It has always striven to that end until today.

Evrensel’s history is, at the same time, also an archive of labour’s struggle.

The Ünaldı Resistance in Antep that took place in the second year of Evrensel’s publishing life and a great many more resistances that occurred in subsequent years have built up a rich, large and living archive for the workers’ paper Evrensel as well as for the working class.

Evrensel has imparted information to workers and labourers in other parts of Turkey and the world about resistances the capitalist media ignores. Not content with this, it has endeavoured to be a propulsive force for resistance. It has tried to act as a signpost so that workers might both learn from their past experiences of struggle and also with reference to positions that might be developed in each new situation to counter the games of the capitalist forces.

Evrensel has been the rostrum for the resistances and struggles of public employees and villagers, and not just of workers. It has striven to make their voices heard so that their struggle for rights will advance and produce gains. It has brought strikes, rallies and harshening living and working conditions into the headlines.

EVRENSEL IS THE WORKERS’ AND LABOURERS’ MEMORY

Following the ’89 Spring actions, the subsequent ’90 Zonguldak Strike and the strikers’ Great Ankara March and the later ’99 widespread actions in opposition to the “Retirement in the Grave” imposition in which the main body of the working class moved into action, Evrensel also served an important function during the TEKEL workers’ Ankara resistance. Evrensel played a major role in bringing this resistance, ignored by the capitalist media for a considerable time, to Turkey’s attention.

On the other hand, a further outcome of the change the ongoing struggle had brought about was the way workers keeping up their resistance in the tents they had set up side by side during the Ankara resistance accompanied one another’s songs in Turkish and Kurdish and danced the halay together, and all these details found space in the pages of the workers’ paper Evrensel and entered history.

Evrensel played a uniting and propelling role in the metal workers’ resistance of 2015 that passed into history as the “Metal Storm” and rocked the strongholds of the monopolies, collaborationists and union bureaucracy.

The Civilian Aviation Union resistance from 7 June 1995 onwards, the Ünaldı resistance, the SEKA resistance, the TEKEL workers’ resistance and the banned strikes of Şişecam, tyre and metal workers as well as Soma, scene of the largest worker manslaughter in the Republic’s history, made it into Evrensel’s headlines.

FOR A STRONGER EVRENSEL

The continued enhanced existence of Evrensel, home to the struggle the oppressed and downtrodden popular masses, not least the working class, are waging for economic, democratic and political rights and freedoms, is dependent on the level to which they champion it.

Today, Evrensel is paying the price for its insistence on printing the truth as it is squeezed with harsh fines, restrictions on advertising rights and increased costs accompanying the crisis.

For Evrensel, which represents the yearning for a classless, exploitationless and free world in the face of the degradation represented by the newspapers that each serve as a lie machine with the unlimited encouragement and support those in power bestow on them, to daily enhance its strength is only possible with the support and ever-greater backing of workers, labourers and the people.

Each letter written to Evrensel, each reader acting simultaneously as a natural reporter, each paper bought from the newsagent and each e-paper subscribed to will constitute a concrete step taken on this road.

THE PAPER OF WOMEN, YOUTH, INTELLECTUALS AND THOSE FIGHTING FOR ENVIRONMENTAL AND NATURAL PROTECTION

Evrensel has been the rostrum of women, youth and intellectuals, and horticulturalists and villagers combatting cyanide-toting imperialist monopolies that are threatening living spaces.

Having regaled its readers with its women’s, youth and book supplements, provincial and sub-provincial supplements, Sunday pages and website for its entire quarter-century publishing life, Evrensel is the pulse of Turkey’s struggle and the rostrum for endeavours to transform life to the good and beautiful.

The numbering of intellectuals and scientists who side with the working class and people among Evrensel’s columnists lends further strength to Evrensel as a rostrum of struggle for Turkey’s working class and downtrodden peoples.

One feature worth underlining when it comes to the function Evrensel serves is the way, in all the workers’ struggles witnessed over Evrensel’s history and with a view to adding strength to these resistances, the intellectuals and academics who are Evrensel columnists, along with featuring them in their columns, have joined them in struggle in the factories and resistance tents.

Evrensel is a paper that does not just cover the problems and struggles of workers and labourers in Turkey, but also closely monitors and publishes on its pages workers’ and labourers’ struggles in mutually distant regions of the world. It defends the joint struggle to attain rights of all workers, be they Turkish, Kurdish, Arab or African and without discriminating between locals and migrants or Turkish nationals and Syrians. The coverage it devoted to the migration and exploitation of migrant labour that followed the Syrian war bears testament to Evrensel’s internationalist outlook.

As it has done for the past quarter century, it decisively defends internationalism as one of the cornerstones of its publishing policy.

EVRENSEL IS THE VOICE OF SCIENCE, PEACE AND FREEDOM

Turkey today is undergoing a period of oppression unrivalled by coup periods. The “single-man, single-party administration,” which proclaimed a state of emergency on the cited pretext of the 15 July coup attempt, furthers the continuation of these policies of oppression to shore up its own rule.

More than a hundred journalists are in jail and nearly two hundred media outlets have been closed. The banning of rallies, demonstrations, rights-seeking actions and strikes has become routine. The oppression meted out to academics, intellectuals, arts world people and scientists who aspire to peace has become commonplace. There is a wish even to destroy the remnants of the freedoms of speech, the press and organization.

The non-solving of the Kurdish problem and the policies of denial of the Kurdish people’s democratic rights under the guise of “counterterrorism” and the stoking up of war in the region are pursued with the slogan of a “national, local and great Turkey.”

With a veritable race taking place to buy arms at great cost from Russia and the USA, justification is sought for cramping workers’, labourers’ and the people’s livelihoods by inquiring after the cost of a bullet.

The capitalist media is trying to conceal the destructive consequences of these policies for the people and the country. We are passing through a period in which 95 per cent of the press space in Turkey is under the power holders’ control.

In such an environment, Evrensel continues to be the voice of science, peace, the brotherhood of peoples and freedom. Against a background in which the people’s opportunities to get hold of the truth have become severely constrained, it becomes increasingly important for Evrensel to grown in strength and continue on its path.