Academic Alphan Telek: The world is in an era of transformation and the system is cracking

Academic Alphan Telek assessed the protests in the world for Evrensel: “The system has become exceptionally fragile, including in developed Western countries.” 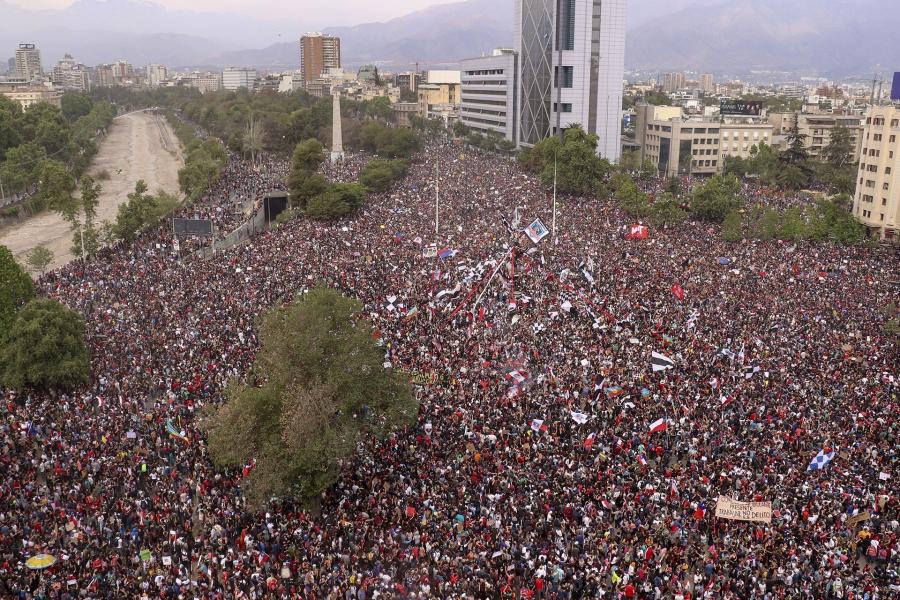 Assessing the protest actions taking place in various countries in the world, academic Alphan Telek commented, “The world is in an era of transformation and the system is cracking. People are building a new web of fraternity and are just not yet aware that this is global. In the case of the movements that started in 2008, governments were exceptionally strong and resisted change. They do not have any such chance today because the system has become exceptionally fragile, including in developed Western countries.”

We spoke to Director of the Istanbul Political Research Institute (İstanPol) and Doctorate Researcher at Sciences Po Paris, Alphan Telek, about the protest actions that have been continuing especially since the start of October from Latin America to the Middle East and as far as South Africa.

Stating that the ongoing protest actions stretch back to the end of 2017 and not the past few months, Telek noted, “Huge social outbursts were experienced in Tunisia and Iran at the end of 2017. People poured out into the streets. The shared motivation of the actions in both countries was the demand for bread. But bread here was a symbol. Essentially, we saw people in both Tunisia and Iran rebelling with the demand for social justice. And these were by no means small actions. 85% of the provinces in Iran participated in these protests. Later, similar actions took place in Armenia and the political elites who had ruled Armenia for years were forced to stand down. It is clear that such protests will continue.”

Stressing that the reason for the protests were the economic and political policies that have been imposed everywhere in the world for the past forty years, Tekel stated, “In a study I conducted with my colleague Seren Selvin Korkmaz, we observed that the policies wheeled out over the past forty years have created a situation of injustice. Moreover, we believe that we are encountering a totally new class structure under the new social system technological transformation has introduced. We are not the only ones to make this finding. However, we face a gradually growing class of the insecure (the precariat) in society within the new class structure. This class is exceptionally angry at the elites who accumulate world-scale wealth and supress people politically. Indeed, thanks to these feelings, I could opt for the term ‘the angry’ when seeking a Turkish equivalent for the precariat.”

DEMAND FOR EQUALITY AND PARTICIPATION COMES TO THE FORE

Considering these protests that started at the end of 2017 and then assumed global significance as embodied by the Yellow Vests in France to be the first appearance of the new class of the precariat on the stage of history, Telek noted, “Currently, similar social groups are rebelling for similar motives and with similar demands in Lebanon, Chile, Azerbaijan, China, France and Spain. This is due to the similarity of the global conditions that unite them. The world is undergoing class transformation and will do so further, but not in the form of the 1970’s. There will be new symbols, new meanings and new battle grounds because society and technology are exceptionally different from before. Looking at the protests in question, we see the demand for equality and participation coming to the fore in all of them. I can express this through the words of Priscilla Ludosky, who joined the Yellow Vests and has become a symbol, ‘Change your style of taxing and governing us.’ Yes, these protests are the eruption of the insecure with the demand for both social and political justice.”

Explaining that the he used the term “social volcanic generation” for these protests taking place throughout the world, Telek said, “The economic and political policies and of course measures being implemented all over the world are creating great anger and stress among people. As a result of this, we are witnessing a veritable social accumulation of energy. This accumulation of energy finds vents at certain points and explodes, like earthquakes and volcanoes. You cannot know where or when it will vent but you can foresee that there will be an explosion because there is an accumulation of social energy. This, in turn, is rooted in the system of injustice and inequality. The system is the entirety of institutions and relationships. Neither the institutions nor the relationships are today able to furnish people with the happy life they desire. This is why there is an anti-movement wave throughout the world.”

Noting that the first generation of protests started in the aftermath of the 2008 financial crisis and ended in 2013, Telek commented, “It was more the educated who took part in the protests of that time. However, there are for the most part poor and non-higher educated people who get by or are forced to get by on the minimum wage in the movements today, and they are pretty large in number.” With reference to the difference between the protest generation that started in 2017 and is still continuing and the protest generation between the years of 2008 and 2013, Tekel made the following assessment: “This time, social movements can topple governments. In the bread rebellion that started last year in Sudan, the government of Omar al-Bashir, who had ruled his country through oppression for decades, fell. Bouteflika, who had ruled for twenty years in Algeria, stood down following the protests that started in February. In Chile and Lebanon, governments have been obliged to take a step back. In France, the Macron government announced a package of measures to calm the Yellow Vests. In short, the world is in an era of transformation and the system is cracking. People are building a new web of fraternity and are just not yet aware that this is global. In the case of the movements that started in 2008, governments were exceptionally strong and resisted change. They do not have any such chance today because the system has become exceptionally fragile, including in developed Western countries.”

“IN IRAQ SOCIAL INJUSTICE INCREASED FURTHER FOLLOWING THE US INVASION”

With regard to the protests taking place in Iraq, which the US occupied in 2003, Alphan Telek made the following assessment: “Iraq unfortunately is a very special example. Canadian journalist Naomi Klein is voicing an important claim. At certain periods – at transitional moments - capitalism can set up testing grounds for the government it wants to bring into being.  For example, the post-1980 period was initially tried out in Chile. Later, the marketist period which excluded people politically and oppressed them was implemented in all its aspects in the world. Klein says Iraq was chosen as a testing ground. Frankly, this interpretation may be fully on the mark. Why? After 2003, the US unleashed the concept of fighting terrorism in the world. As a result of this, we have become besieged to an unprecedented extent by the concept and measures of security. The whole world has entered a period of this kind. Of course, as people grappled with security concerns, governments ushered in privatization reforms and took marketist measures. As people were contending with great security fears, all the investments and attainments made by the public sector were gifted away all over the world. Iraq is a special example of this. Both political and social injustice in the country increased further following the US invasion. Today, I am unable to see a more justified and legitimate reaction than the people in Iraq being on the street as part of the global protest movements.”