A real “secure region” can be established through peace not war

The correct way to resolve issues in the region and in its countries passes through not war but peace and policies that will strengthen the fraternity of the peoples. 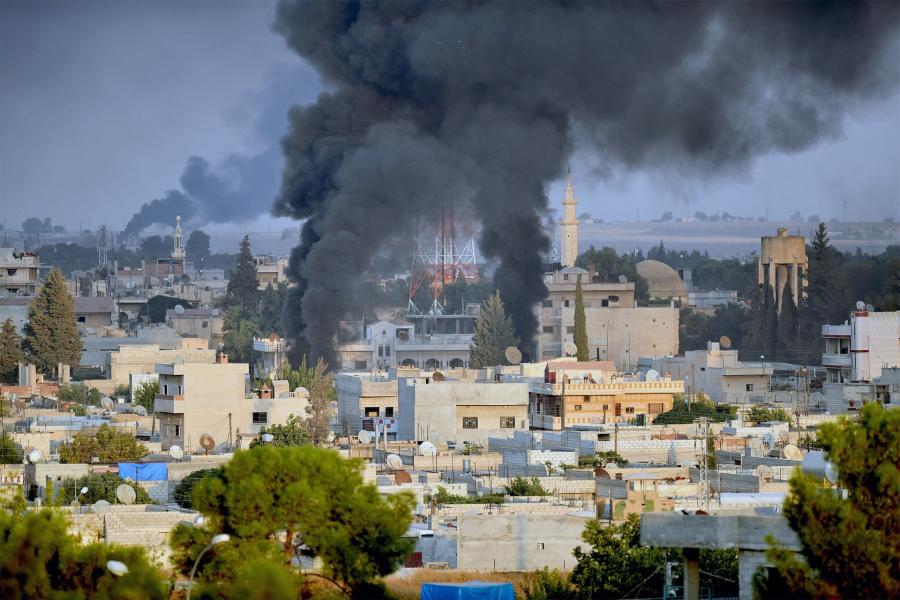 The history of the last century of Middle East is a history where it is not suprising that the seeming winner is often the loser, where the seeming loser is the winner and where each “victory” turns into a “Pyrrhic victory.”

And since the concept of “pragmatism” proved inadequate, what made it necessary for the concept of “eastern policy” to be added to diplomatic writing was this very fluidity in the region.

Undoubtedly, behind this complex need for development is the petrol-greased, natural-gas consecrated strategic significance of the region in the re-appropriation of the world, on which is based the “rootlessness” of regional reactionary powers’ interests as much as the relations between the regional reactionary powers and imperialists vying for domination in the region, rendering it more fluid than any other in the world.

WERE THE LIMITS OF THE OPERATION DECIDED IN PARTNERHSIP WITH THE US?

We have been able see more closely over the recent years the breadth of the fluid basis on which the developments in the region are situated through the attempts of Erdoğan-AKP rule that has dived headlong into the quagmire in the region, centred on Syria. And one of the most typical examples of this is “Erdoğan’s anti-imperialism” which poses with Putin in one arm and Trump in the other!

The period between Erdoğan who went to holiday together with the Asads to “Asad the murderer of his own people” does not even amount to months. Or how many times did the Turkish-Russian relations fluctuate in the last decade?

How many times did the US sold the Kurds out and how many times did it declare them as its important allies? And indeed, we witnessed the same situation more clearly in the altercations about whether Turkey will establish “a secure region” “in the east of Euphrates.”

And especially the last few days… Pertinently, while it is stated that “The US is withdrawing from the region, it is not giving support to Turkey’s intervention in the east of Euphrates” on the one hand, Trump can say "if Turkey does anything that I consider to be off limits, I will totally destroy and obliterate the Economy of Turkey. I've done before!" on the other. Hence all signs in fact indicate that the limits of Turley’s intervention in Syria has been drawn between Erdoğan and Trump.

DO THE PLANS TABLED CORRESPOND TO ANYTHING IN THE FIELD?

Erdoğan and his representatives have been promoting the objective in the “secure region” as the “settlement of 1-2 million refugees and rendering Syrian Democratic Forces ineffectual by forming a ‘secure region’ in the east of Euphrates that is 480 kilometres long and 30 to 40 kilometres deep.” But despite their lure over the table, the possibility for these plans to actualise is extremely difficult due to the countless factors on which it depends.

Indeed there are debates about the point to which Turkey will extend the “secure region,” whether the SDF will enter a “final war” or disregarding an incursion set within the limits agreed with the US, it will prepare according to Turkey’s subsequent steps. Once again, it is contentious whether Russia and Iran behind Syria will seek to enter moves to expel Turkey out of Syria after the US moves away from the region and a thick line is drawn between Turkey and the US. And another topic for discussion is scenarios to the effect that Turkey has thus come to the position of serving the plans of the Syrian regime together with those of Iran and Russia. And the fluid basis in the region provides the conditions warranting these debates.

But what is most important and urgent for the forces of democracy in Turkey is the struggle to impede the Erdoğan-Bahçeli alliance to draw Turkey further into the depths of the quagmire in the Middle East.

THE STRUGGLE FOR PEACE AND FRATERNISATION OF THE PEOPLE

Immediately after the arrival of statements from the US that their forces in the region will be withdrawn, CHP, HDP, EMEP, ÖDP opposed a military operation Turkey will undertake in northern Syria and have openly expressed that this will serve the imperialists and the reactionary powers in the region and that Turkey will be further drawn into the quagmire in the region. Additionally, they have appealed to the government to reverse steps that will worsen the issues in the region, which will also cause greater troubles for Turkey.From the point of view of broad sections of the people, there is not a wide support for this operation as compared, for instance, with the “Euphrates Shield” and the operation against Afrin. This was also evidenced clearly in the campaign conducted by AKP-MHP in the last local elections around “the question of survival.” A significant section of the peoples of Turkey discern that such operations cannot resolve issues. Further, Erdoğan himself had declared that “mischief have become prevalent” amongst it. In such conditions, the idea that the “secure region” is in fact a “secure region” for AKP and MHP is also gaining momentum amongst the people. As a military operation undertaken in conditions of a great economic crisis that will deepen it further, and where cost increases to main consumption goods and new taxes are about to arrive and where only recently, increases were brought to road, bridges, train and public transport and the post service costs, it is a bitter truth of Turkey that this military operation, can “obliterate the economy” without needing so much as Trump’s intervention.Trade unions, labour professional organisations, leaving aside politics and values such as peace, the fraternity of peoples, are obliged to oppose such a military operation even solely due to these economic reasons.

THE STRUGGLE FOR PEACE AND THE FRATERNITY OF THE PEOPLES

In response to Trump’ statements, the CHP Group Deputy Chair, Engin Özkoç said that “our soldiers should not be pushed into the Middle East quagmire.” While this CHP statement is right, it is a complete contradiction for the Leader, Kılıçdaroğlu to say that “we will support the resolution begrudgingly.” This is because a vote for “yes to the resolution” is also the retraction of the steps taken forwards. Let this be put on record here too.

And the final words, to be sure, are for those who have turned the “secure region” into a “question of survival” and are hoping to win easy victories through this. In the region of “Pyrrhic Victories,” it is the victory of those who lose what they have while expecting to gain more. Hence, the correct way to resolve issues in the region and in its countries passes through not war but peace and policies that will strengthen the fraternity of the peoples.

Let this also be stated now!

Labour Party (EMEP): We will not carry this burden, no to war in Syria!