Chair of İzmir Branch No 7 of Genel-İş Trade Union, Kemal Köroğlu: Trade unions are the workers’ organizations of struggle; trade unionism is not a profession. 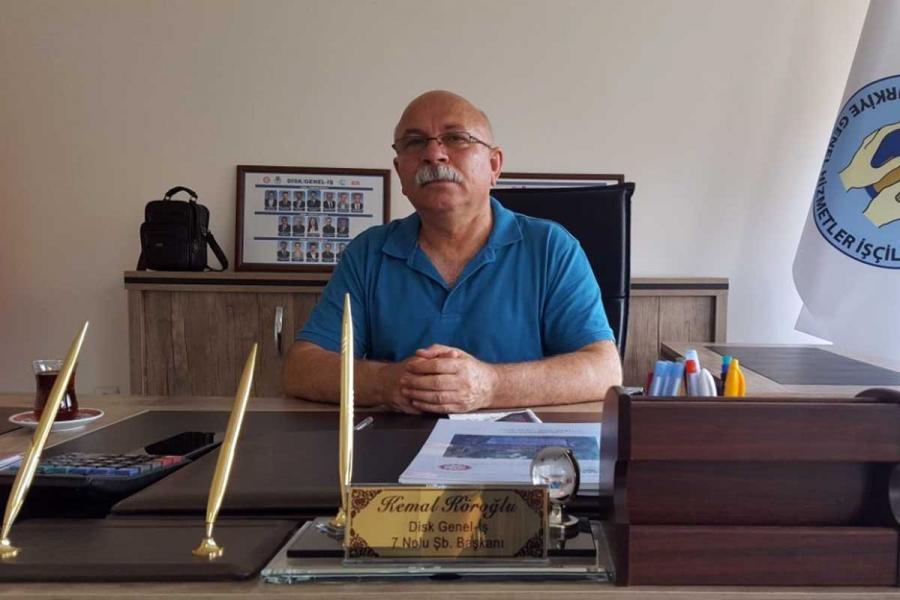 I spoke to Chair of İzmir Branch No 7 of the Confederation of Progressive Trade Unions-affiliated Genel-İş Trade Union, Kemal Köroğlu, about his years of struggle extending from his life as a worker to his time as a trade union administrator and the kind of approach to trade unionism that is needed. Also describing the nature of the preparations they were making for the general congress they would hold on 16 June, Köroğlu said, indicating that trade unionism was not a profession and trade unions were the workers’ organizations of struggle, the trade union struggle had to be waged in line with the interests of the working class.

Having spent years of your life as a worker, you became unionized in the All Transport Workers' Union (TÜMTİS) in 1997. Can you tell us a bit about this process?

I first became acquainted with trade union struggle while working at the Warehouse Complex in Bornova Pınarbaşı. At the time I became unionized in TÜMTİS, its general chair was Sabri Topçu. How fortunate that, while becoming acquainted with trade union struggle, I learnt from Sabri Topçu that workers’ voices prevail in every area of a union and unions must struggle in line with the interests of the working class, that is, in short, about class trade unionism. I worked as a worker for nine years at the warehouse complex. Over that time, I went through a ninety-day fightback and this fightback resulted in the regaining of our rights and my job. I later started working at Gap Kargo. At that time I acted as shop steward in TÜMTİS and administrator of the branch auditing board. I later ran up against the trade union bureaucracy at the TÜMTİS branch. Trade union bureaucracy is a problem experienced at many trade unions in Turkey. And I was sacked for fighting it. Following seven-eight months of unemployment, I started working for the Kürşat subcontractor company at the Parks and Gardens Department at İzmir Metropolitan Municipality.

WE ORGANIZED THROUGH COMMITTEES

You launched a fightback against the Kürşat-Vira subcontractor company.

I started work at the Kürşat subcontractor company in 2007. In 2008, we embarked on unionization activity here and started to fight with our sights set on unionizing and moving to a municipal company. A total of 1200 workers worked at the subcontractor company. In 2008 we the Kürşat-Vira subcontractor workers staged big actions. Entering 2009, we put up a 72-day fightback that started on 5 January and we ended on 19 March in front of the İzmir Metropolitan Municipality. We stepped up our fight against the subcontractor with our worker colleagues by staying 24/7 in front of the town hall. In that period, the İzmir Metropolitan Mayor could not ignore our struggle and was forced to take us into the municipal company. In the ensuing process, our unionization drive started.

Could you tell us a bit about the unionization drive?

Since we thought it would be appropriate in organizing around unionization to organize through committees, we also established workplaces’ committees. We created these committees with the people our colleagues working at the workplaces elected. Later, we set up a senior committee with our colleagues on the committees and succeeded in moving to the municipal company and becoming unionized by the time we had reached 2011. As a result of this fight, we set up Genel-İş Branch No 2 affiliated to the Confederation of Progressive Trade Unions in İzmir. I also actually saw the degree of correctness of the unionization drive we went through with the worker colleagues from the subcontractor period. Before entering branch administration, I first stated that I would serve having obtained the colleagues’ approval and this is how I assumed an administrative post in Branch No 2.

IT ISN’T ENOUGH JUST TO MAKE A GOOD COLLECTIVE AGREEMENT

You founded a union through the committees you set up. So, what kind of approach to unionism is needed?

Trade unionism is not being a doctor or teacher or other profession. Unions are workers’ organizations of struggle. In the union, we have always attached importance to being able to align with class unionism and continue on our path with this approach as far as our strength permitted. We conducted union activities with this understanding at Branch No 2. We know that many unionists speak of class unionism when they mount the rostrum or in normal chat. But we all know that a unionist who shores up capital’s policies and parties is very far from class unionism. If we the workers’ rights are to be permanent in this country, the working class must establish its own rule and unions must struggle towards this end. For sure, unions can make good collective agreements through struggle, but, for collective labour agreements to be permanent, this can only be in a country ruled by an administration under which workers can live like humans, there can be a just distribution and there is justice, law, peace, fraternity and friendship, in which the working class is in power. Not seeing trade unionism as a profession, I was guided by this on both taking up duties on Branch No 2 and on stepping down. My basic profession is as a worker. My aim while organizing and setting up a union in the subcontractor days was not to be a unionist but not to work as a subcontractor and work as a unionized worker. I think union work and unionism must be looked at in these terms. In short, the position given in keeping with the workers’ will must be performed and must be relinquished under the same will when this is appropriate.

Now in organizational work you are Branch Chair of Genel-İş İzmir Branch No 7 in which Bornova Municipality and Aegean University staff are organized. Can you briefly fill us in on how this has panned out?

On assuming duties in Branch No 7, I similarly placed my worker colleagues’ will in the forefront. In this process, I had to start work in a sector that was in the area in which the union was organized. In fact, I took a bit of a risk at that time because İZENERJİ was an organized workplace at which there was a collective labour agreement and there were rights. But I took all the risks and started work at a subcontractor and conducted a unionization drive with the colleagues at the subcontractor. I took up the post of branch chair through the worker colleagues’ decision.

WE CAME TOGETHER WITH MEMBERS OF ANOTHER UNION

Just as you once battled with subcontractors, you have most recently fought dismissals through security investigations under decrees with the force of law.

We launched a fightback against the keeping of files on dozens of our colleagues working at the Aegean University and termination of their contracts of employment under Decree with the Force of Law number 696. The fightback we started lasted about one year and in the end all workers apart from a few of our colleagues returned to their jobs. And the cases of those of our colleagues who were unable to return are pending. At that time, we came together with workers who were members of another union and had been dismissed and secured their return to their jobs through joint struggle. They represented a step forward for us. We also brought together decree-victim Metro cleaning workers with our union in the same way and secured their transfer to the municipal company. We started a fight for cleaning workers working at the İzmir Suburban Rail System (İZBAN) to transfer from a subcontractor to the municipal company.

WORKERS’ WILL REFLECTED IN THE COLLECTIVE LABOUR AGREEMENT

You signed a collective labour agreement with Bornova Municipality in recent months. Can you briefly comment on how that unfolded?

Compulsory individual retirement insurance and transferring severance pay to a fund are back on the agenda. What kind of fight should be organized against this?

Since they are ignorant about getting by on minimum wage in a place where the hunger and poverty limits are known, they also speak of compulsory individual retirement insurance. The government has brought compulsory individual retirement insurance onto the agenda to create new spheres of capital for itself. But we workers will not nourish capital. We say severance pay is the worker’s last stronghold. We should actually have struggled more before capital breached the last stronghold because if we let it be usurped there will remain neither organized workers nor trade unions in this country. We must continue unabated to lay bare capital’s and the government’s anti-labour endeavours. We must undertake the necessary initiatives to spread awareness that each workplace fightback and each struggle - without discriminating trade unions by sector - is class struggle and, in keeping with this end, to “reorganize” the local struggle around this action.

In the process, you as a branch are preparing for a general congress. Can you tell us how you are doing so?

What is incumbent on us at our branch congress and all meetings should not just be reeling off capital’s assaults on the working class. We should basically discuss how we can defend our acquired rights and how we can place the burden of the crisis on those responsible for it. Yes, the capitalist crisis is increasingly deepening as a result of economic policies that are based on plunder and exploitation and protect cronies, and capital and the government are attacking with all the power they can muster to make workers pay the price. However, workers are not helpless and without choice. On the contrary, if workers struggle by uniting around their demands neither the bosses nor those behind them can attain their goals. And our agenda at our general congress will be compulsory individual retirement insurance and severance pay. Severance pay is the worker’s guarantee of a job. We won’t let this guarantee of ours be usurped and we’ll hold our congress in keeping with this demand. We’ll discuss how we can protect our attainments, how we should fight to this end and the aligning of unions to unite the struggle. Apart from this, we’ve also organized our congress so as to come together with the worker colleagues in both the fightback we staged and the collective labour agreement process. For one thing, we’ve stepped up our unionization drive and will hold our branch’s second ordinary congress on 16 June and, for another, on the anniversary of the 15-16 June Fightback that has a place in the struggle of the Turkish working-class movement.