Venezuela from Chavez to Maduro 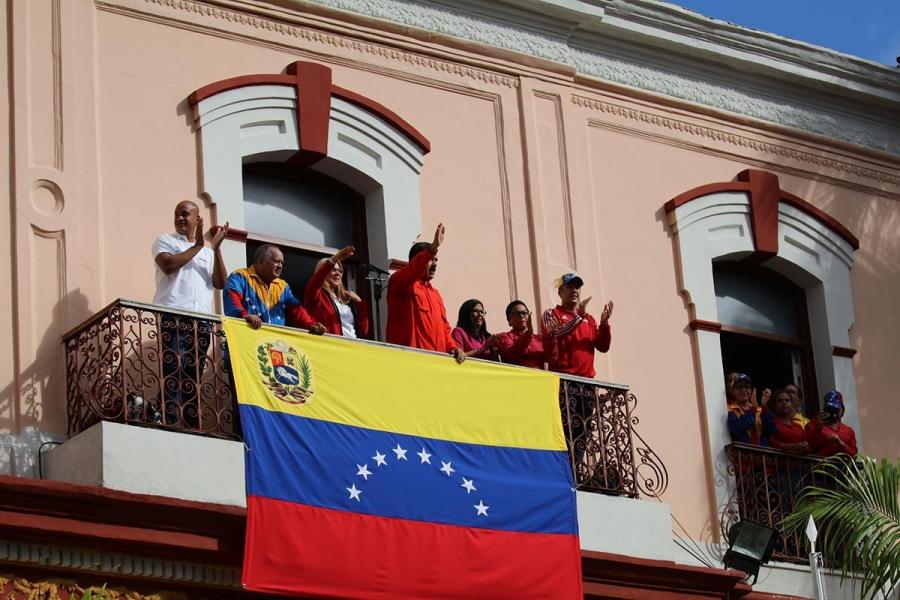 Chavez first attempted a coup but success eluded him.

The Latin American coup tradition is far more effective than ours but, even if coup attempters have received pretty stiff punishments, their release has ensued easily under changed political circumstances. Chavez, for his part, was no ordinary coup instigator but was the leader of a political movement (Revolutionary Bolivarian Movement-200) he had founded that enjoyed considerable support. Exiting prison following a bloodless coup before two years were out, he founded a political party named the Fifth Republic Movement and was elected president following victory in the 1998 elections.

From the outset, Venezuela’s bourgeois power-holders opposed Chavez, an anti-imperialist following in the footsteps of Simon Bolivar, who had on the one hand fought to unite Latin America and, on the other, to liberate the continent from Spanish occupation. Combining their opposition with street activism, they never let up in their efforts to rid themselves of Chavez. Time after time, Chavez succeeded in consolidating his power with the regained support of the people and dissipating the bourgeois opposition’s reactionary campaigns at the polls. He won the elections he repeated two years after being elected and continued in this vein.

Chavez neither headed a proletarian movement, nor did what was called “21st Century Socialism” involve anything more than a programme of struggle that was progressive but based on ideas that did not transcend the bounds of capitalism. But he was an anti-imperialist Bolivarian and was aware of what he was about. Even if he called his programme “socialism” he did not undertake the construction of socialism based on the working class and its movement; but he knew he needed a popular base otherwise he would be ousted.

He did not attack capitalism but managed to bring about certain improvements in the people’s circumstances with his anti-imperialist orientation in which he used petroleum as a weapon and managed to gain the support of the poor based on the committees he organized among the people.

Chavez in particular reduced the prices of foodstuffs he subsidized thanks to increased petroleum revenue. He increased the budged devoted to health and education.

The bourgeoisie’s response was not late in coming. A military coup targeting Chavez for which the stage had been set with marches and a general strike declared following protests was staged in April 2002. Chair of the bosses’ union, Carmona, who had organized the anti-Chavez opposition, was declared president. However, the people who supported him poured into the street in an organized fashion and Chavez, who was being detained at a military base, returned within two days after the military also withdrew its support for the putschists.

Now a fresh coup is being hatched against Maduro, who was elected president following Chavez’s death. Both the calculations and the plans are strikingly similar. Compared to the Chavez period, the rise of the bourgeois oligarchy’s opposition is rooted in winning the elections to the Assembly set up based on the constitution for which Chavez gained approval in the 1999 referendum.

WHAT MADURO HAS DONE AND HAS BEEN UNABLE TO DO

Chavez did not set about seizing the monopoly-owned banks, industrial investments, foreign trade and energy and mining property, and socializing the country’s economy, but nevertheless made certain nationalizations. Most importantly, he nationalized the petroleum areas that the energy monopolies such as BP, Exxon Mobil, Total and Chevron operated and set about raising low petroleum prices in cooperation with OPEC and succeeded in this. By expanding petroleum exports into countries like China, from which tens of billions of dollars in loans were obtained, prices per barrel that had fallen to $10 in sales to the US went up to $40 in 2012, for example, and Chavez secured the finance for his initiatives.

It cannot however be said that Maduro, who replaced Chavez to continue the latter’s path of reform, has succeeded in this endeavour.

This must not be imagined to be entirely Maduro’s fault. Petroleum prices, the main support of the Venezuelan economy, which continued to rise following Chavez, have been falling again for two years. As the order becomes “ingrained” to an extent, the “second economy” or black market caused by subsidies and the fall of the currency, the bolivar, along with the maintaining of a low dollar exchange rate and the environment of high inflation in which fixed prices are being set to prevent the prices of goods from rising are the two main consequences that are building up dissatisfaction among the impoverished people. At the same time, with the first of these two consequences which are among the reasons for the collapse of the economy and the rise in unemployment and poverty enriching and strengthening the monopolistic oligarchy who dominate the protected capitalist economy, the second has started to create a new layer in Maduro’s entourage that is similarly growing rich.

Chavez was a match for the Venezuelan financial capital and monopolies whose interests were at one with those of the US and were part of the international monopolies because he kept the door closed on the formation of “gangs” or groups that leveraged their strongholds to profiteer on the back of the people. Just as in the example of Lula/Dilma Rousseff in Brazil, heedless of whether he would become mired in corruption and profiteering, Maduro was unable to continue these checks as Chavez had succeeded in doing.

As petroleum prices fell, and with the addition of the American embargo, the reality hit home of a country in which most foodstuffs, many manufacturing inputs and spare parts were unavailable, groups of factories had become inoperable and unemployment and poverty were on the rise. With Maduro trying in spite of everything to stand up to the reactionary bourgeois opposition, there has been a pronounced swelling of the ranks of the anti-Maduro opposition among the increasingly dissatisfied people. This has not yet become a general trend but is on the increase.

Even if it lacks strong backing in the military today, one buttress for the reactionary opposition’s attempts at a political coup is this dissatisfaction that is swelling up and the trend to move away from Maduro among the ranks of the people. Another, conversely, as might be imagined, is the support provided by American imperialism which is exceptionally uncomfortable with the left-leaning anti-imperialism that gained strength in the continent with Chavez’s appearance in Venezuela and has meanwhile become the dominant trend in most Latin American countries.

COUP, AMERICAN AND EUROPEAN DEMOCRACY AND THE PATH TO POPULAR SALVATION

The Lima Group, a coterie of America’s cronies created by fourteen Latin countries, asked Maduro not to recontinue in the same post in the aftermath of the low-turnout presidential election last May which the bourgeois opposition boycotted and deemed illegitimate. US National Security Advisor J. Bolton, for his part, went further and called on the army to defend the supremacy of the law and the constitutional order, declaring the National Assembly to be “the only legitimate branch of government.” With Maduro announcing on 23 January that he would continue in office, Assembly President and leader of the opposition Guaido declared himself interim president and called on his supporters to take to the streets!

However, anti-imperialism and the disposition to fight for democracy still appeared to be far stronger and far larger masses of the poor came out into the street in opposition to the coup.

Following Guaido, brazen announcements came first from Trump and then from the Lima Group countries apart from Mexico. They supported Guaido as the sole legitimate president! Moreover, the USA proclaimed that its diplomats, most of them spies, would stay in the country it had called on Maduro to leave. The intervention is blatant and we will see where it leads, for example whether an invasion will be attempted.

Little credence can surely be attached to opposition to the coup attempt against the Maduro government on the grounds of “opposing coups.” Opposing a coup is one of the minimum requirements of bourgeois democracy, but opposition to the coup, as Russia and China have done, may also have other political reasons. For example, the Turkish government that lacks all democratic credentials also took such a stance. However, discounting Germany, which has made no clear announcement and is trying to establish the EU’s position, the EU’s “elected leaders” like D. Tusk and many EU countries, not least France, have come out in outright support for the coup in deeming the Maduro government to be illegitimate. This shows the stunted nature today of the thing called bourgeois democracy!

On the other hand, a pro-Maduro stance restricted to opposition to coups is clearly inadequate. The issue is an issue of 1) opposition to imperialism especially American imperialism and 2) supporting the people against international and collaborative Venezuelan monopolies and embracing the people’s national and social liberation struggle. Maduro is not following this path. What needs to be done is to target the “sharp end of the spear,” imperialism and the collaborative monopolies, while not sidelining Maduro yet not making him the prime aim, and to struggle for the salvation of the Venezuelan people and not Maduro and his government. This salvation can only be based on the organized working class and a struggle on which it stamps its mark.

EMEP: No to the Guaido Coup! Imperialists hands off Venezuela!

What is going on in Venezuela?