Agreement signed at İZBAN under Supreme Arbitration Board threat

Following the banning of the strike by Erdoğan at İzmir Suburban Rail System (İZBAN), the agreement signed under Supreme Arbitration Board threat. 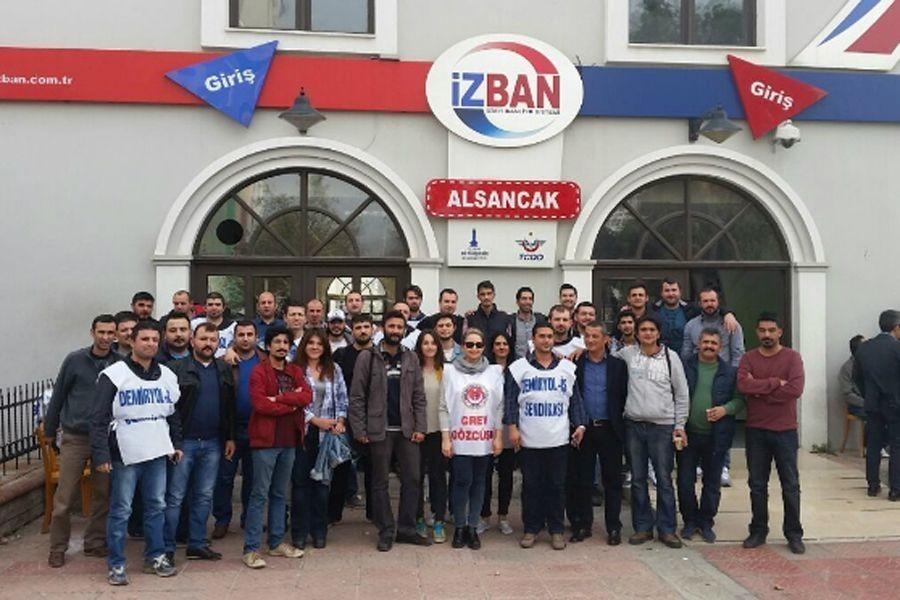 The agreement at İzmir Suburban Rail System (İZBAN), where the workers’ strike was ended under a government ban, has also been concluded under a Supreme Arbitration Board threat. The workers will get an average raise of 26%.

With collective labour agreement negotiations stalling at İZBAN, a joint entity forming one of the main public transport networks in İzmir of Izmir Metropolitan Municipality and Turkish State Railways, members of the İzmir Branch of the Türk-İş-affiliated Railworkers Union came out on strike on 10 December 2018. The strike was banned on its 29th day by AKP General Chair and President Erdoğan, with it said to be, “of a disruptive nature for public transport services within the city.”

Agreement was reached today at talks held between İZBAN functionaries and the Railworkers Union. The workers got a total raise of 26%. This offer, along with the basic wage, bonus and other entitlements, amounts to 22.1% for advanced technicians, 26% for drivers, 24.18% for technicians, 22.96% for operators, 28.2% for accountants and 29.38% for booking clerks.

Advanced technicians will receive gross basic pay of 3,125 lira, drivers of 3,075 lira, station operators of 2,825 lira, accountants of 2,750 lira and booking clerks of 2,675 lira. The bonus has been set at 90 days for the first year, 95 days for the first six months of the second year and 100 days for the second six months of the second year. The work demands bonus for drivers has gone up from 95 lira to 270 lira. Technicians and advanced technicians will receive a work demands bonus of 150 lira and other workers of 100 lira. The 47 lira fuel allowance will become 70 lira and the education allowances will be increased by 33%.

Railworkers Union İzmir Branch Chair Hüseyin Ervüz said, “Unfortunately, we did not attain the goals we went on strike for and this is the result we got as things played out. We had no chance of coming out on strike again following the sixty-day period and it would have gone to the Supreme Arbitration Board. As the Railworkers Union, we concluded 48 agreements at the Supreme Arbitration Board in 2018 and there wasn’t a 5% raise in any one of them. The İZBAN workers put up the best struggle they could.”

The collective labour agreement demands of the 343 employees working as drivers, technicians, advanced technicians, station operators and booking clerks on İZBAN, which serves forty stations over a 136-kilometre line between Aliağa and Selçuk, were for an improvement of their wages that had eroded under the economic crisis and to obtain the same remuneration as other workers in the rail transport branch. The cost of this to İZBAN is around 34% of its budget.