EMEP: Fraternity of peoples is bombed in Afrin

Labour Party (EMEP) of Turkey called on the peoples of Turkey and workers of all nationalities to demand an ‘end’ to the Afrin operation. 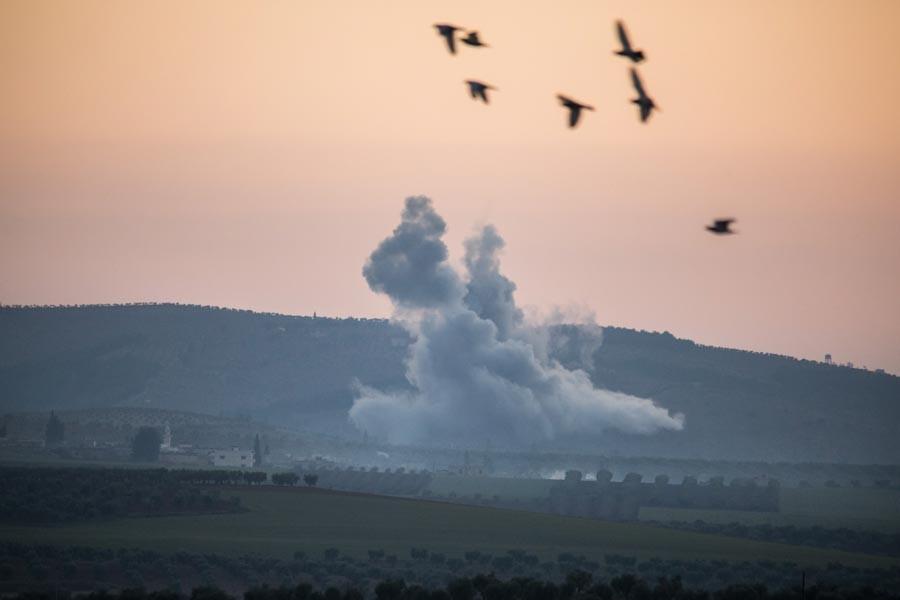 Turkish ground forces entered Syria’s Afrin province on Sunday morning in a bid to oust US-backed Kurdish militias from the border between the two countries.

The escalation comes on the second day of Turkey’s “Operation Olive Branch”, which began on Saturday with a barrage of air strikes on the Kurdish YPG militia in the same province.

Turkey said it wanted to create a 30km safe zone around Afrin, deep inside Syria, representing a new phase of Turkish involvement in the country's civil war.

Hours after ground forces entered the country, a missile fired in Syria hit the Turkish border town of Reyhanli, killing a Syrian national and wounding 32 people.

Turkey made its move just a week after the US announced it was working to create a new Syrian Border Security Force by backing Syrian Democratic Forces, which include militia from the Kurdish YPG.

The Turkish government regards the YPG as a terrorist organisation closely tied to the outlawed Kurdistan Workers Party, which has carried out a bloody three-year insurgency in Turkey’s southeast.

Who does the the politics of AKP government in Syria benefit?

EMEP: TURKEY IS DRAGGED INTO THE QUAGMIRE OF WAR!

Labour Party (EMEP) of Turkey called on the peoples of Turkey and workers of all nationalities to demand an ‘END’ to the Afrin operation.

"The Afrin Operation, started Saturday following long preparations, is celebrated by the government and its media as a victory. Afrin is governed democratically by the Kurds and other peoples in the region. While bombs rain down on the city, where up to a million civilians escaping the Syrian civil war currently live, representatives of the Erdoğan regime - rather mockingly - claim that they will “liberate Afrin”. On the contrary, operation ‘Olive Branch’ is fanning the flames of enmity between Kurds and Turks, and dragging Turkey to the centre of the quagmire of war in the region.

The threat comes not from the peoples of the region but from imperialism and its co-conspirators!

President Erdoğan and representatives of the government claim that the aim of the operation is ‘national security’, and it started following negotiations with and the withdrawal of Russian forces from the city. So Russia, in a struggle with the US to control Syria, has given permission for this operation only because it serves its interests. With this ‘green light’, Russia aims to pit Turkey and the US against each other in the region, as well as pushing Syrian Kurds into a corner so that they would be willing to accept a solution under the guardianship of Russia.

It is clear that those that drag the country into the heart of this war of domination between imperialists, and bomb our brothers and sisters in Syria with the ‘green light’ from an imperialist power, will increase the threat and danger to our country. Therefore, the real threat to the peoples of Turkey is not our Kurdish neighbours who fought against ISIS and other jihadist gangs in northern Syria and Rojava and built democratic regimes with other peoples of the region. The real threat is the imperialists and their regional co-conspirators, inciting enmity among the oppressed peoples of the Middle East for the last 100 years and using animosity towards Kurds to serve their own interests.

Today, the democratic system of the Syrian Kurds – who always stated that they are open to dialogue with Turkey – is seen as a threat by the Erdoğan government. This is because they left no room for a solution in the Kurdish issue, and insisted on their politics of oppression and violence. However, this line of politics is dragging the country to the quagmire of war in the region and sabotages the conditions for peaceful co-existence within our borders between the Turks and the Kurds.

The government pushes for war to serve its own interests!

There is the option for a solution that could mean peace with the Syrian Kurds and other peoples in the region and a democratic solution in the country, but the government is intent on making Turkey a part of imperialists’ plans.

The Erdoğan government, in a pact with the nationalist MHP, sees the Afrin operation as a necessary step for the survival of their own rule rather than the country. Presenting this as an operation for ‘national security’, they are trying to force everyone to take a stand behind them and oppress not only the Kurds but all those who defend a peaceful and humane way of life. It is clear that they want to use for this purpose both the State of Emergency and the statutory decree that gives legal immunity - in the name of ‘fighting terror’ - to those that support the government.

We must raise the struggle for peace in the region and democracy in the country.

As the Labour Party (EMEP), we call on the peoples of Turkey and workers of all nationalities to demand an ‘END’ to the Afrin operation, which pushes the country into a ring of fire for the interests of the government. We call on all labour, peace and democratic forces to raise the struggle against bombing ‘fraternity of peoples’ in Afrin, against dragging the country into the quagmire of war, and for the struggle or peace in the region and democracy in the country."

Idlib Operation: The end in Syria

LABOUR YOUTH: WE WILL NOT SURRENDER TO WAR POLICIES!

Labour Youth also called the youth of Turkey to unite against these war policies and join the struggle for peace and an independent, democratic, secular country. (EVRENSEL DAILY)