The new immunity decree is freeing purge attacks against civilians 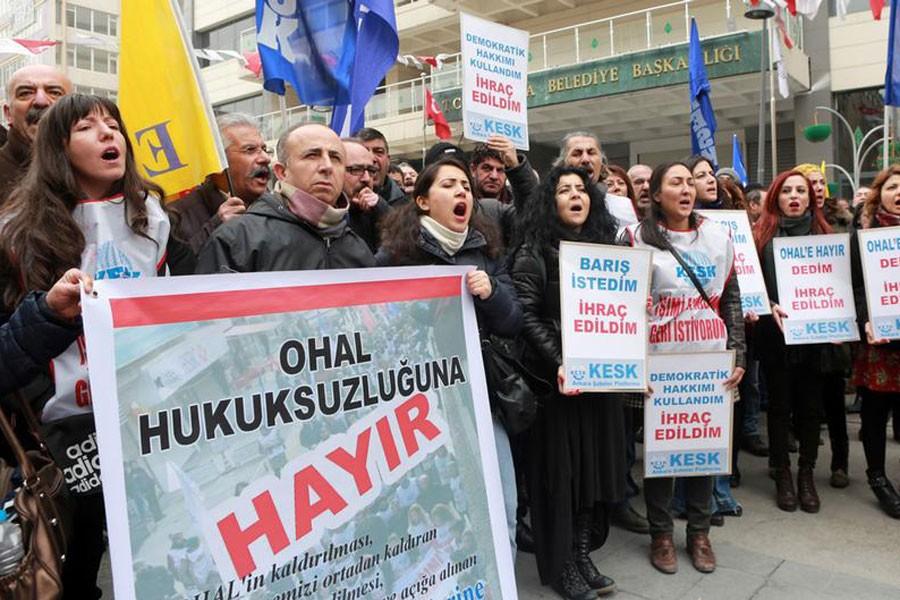 On 24th December, AKP government passed a new Decree-Law no. 696. “Civilians" were included in this arrangement for public officials with Decree 675 published on November 8, 2016. With the Decree No. 675 published the people responsible for the suppression of the 15 July coup and terrorist acts were not legally, administratively, financially and criminally responsible for their duties and functions.

In Decree-Law no. 696, "civil" was also added to this article. According to the new substance added, "the provisions of the first paragraph shall apply to persons acting under the suppression of acts of the coup, acts of terror and their continuing actions, irrespective of whether they carry an official attribute or whether they fulfil an official duty".

Here is the old item:

ARTICLE 37- (1) The persons who take decisions within the scope of the suppression of the acts of coup d'etat and terrorist acts carried out on 15/7/2016 and their continuing actions, making decisions or measures, persons engaged in all kinds of judicial and administrative measures and the law issued during the state of emergency legal, administrative, financial and criminal liability shall not arise because of the decisions, duties and acts of the persons who make decisions within the scope of the decisions and fulfill their duties.

The new clause added to Article 37 is as follows:

"Article 121- The following paragraph has been added to Article 37 of the Law on the Adoption of the Decree Law No. 6755 dated 8/11/2016 on Measures to be Taken under the Extraordinary Status and the Regulation on the Implementation Regulations of Some Institutions and Organizations by Amending the Decree Law.

(2) Notwithstanding whether individuals hold a formal title or whether they have fulfilled a formal duty, those who have acted in the scope of suppressing the coup attempt and acts of terror on July 15, 2016, and actions that were extensions of these events will be exempt from being put on trial for their actions.

Since the coup attempt on July 15, 2016, there are many “paramilitary organisations” named as SADAT, Kardeş Kal Türkiye (Remain Brothers Turkey). According to the Cumhuriyet newspaper, founder of Kardeş Kal Türkiye (Remain Brothers Turkey), Orhan Uzuner, explained that “the aim of the group was to get people to take to the streets in the shortest time possible in the event of a coup attempt.”

Another example is SADAT, founded by former generals who dismissed from Turkish Military, in 2012. After the coup attempt, President Tayyip Erdoğan made Adnan Tanrıverdi, president and founder of SADAT as the chief military counsellor. Some of these generals started to work at SADAT to give military training to other countries.

An internet TV, Ahsen TV, interviewed with people, holding guns and demanding for having the right to use fluted armed guns, apparently at a gun show. In Turkey law clearly prohibits fluted guns which let people attack quickly and more accurate unless if it is for the hunt. At the end of the interview group with small children, group spokesman underlines that the government supports people being armed after the failed coup on July 15, the person says they are getting ready to defend the government in a possible uprising or military coup and they want to buy the only gun which made by Turks.

IMMUNITY DECREE IS TAKING US BACK TO 'PRIMITIVE STATE'

“This regulation takes us back to a primitive state - a state of nature where one may kill another without legal consequences,” Türmen talked to Evrensel.

“This is terrifying,” Türmen said and continued: “An earlier decree granted immunity regarding state officials’ acts. This was already wrong. Now, granting the same immunity to civilians can have grave consequences, an official policy of immunity can lead to chaos in the country.”

The legal definition of an “act of terror” is very vague in Turkey, Kerem Altıparmak, a legal scholar, said on social media, pointing to another problem inherent in the decree.

“While prosecutors and courts take years to try journalists, academics on ‘terror crimes,’ politicians are being charged with ‘terror offences’ for their speeches; what will stop mobs from attacking dissidents?” Altıparmak asked.

OPPOSITION UP IN ARMS AGAINST GOV’T DECREE

The opposition parties expressed criticisms against the newly declared state of emergency decrees which brought about extensive regulations from economy to judiciary.

The main opposition Republican People’s Party (CHP) announced it will appeal to the Constitutional Court, while opposition People’s Democratic Party (HDP) called out all political parties to convene an extraordinary session in parliament.

Bülent Tezcan, the CHP spokesperson, especially criticized an article by which the civilians who have fought against the putschists are exempted from any criminal liability for their deeds during the coup attempt and “in following terror incidents.”

“This article is an article to build civil armed forces by the hands of the government,” Tezcan said following an extraordinary meeting of the party’s Central Executive Board on Monday.

CHP’s meeting came a day after the government issued two more state of emergency decrees that made extensive amendments to over 50 different laws.

Tezcan argued that the article amounts to a “covert amnesty,” and it signals a further legal loophole for future actions committed under the name of “counter-terrorism.”

“It is a very dangerous process. It is just like placing an ignited bomb on the heart of society,” he said.

“These regulations which militarize the society and the state and paves a way for the formation of armed civil gangs should immediately be lifted,” he added.

The decree includes only incidents that happened on the night of the coup attempt and the following morning, ruling Justice and Development Party (AKP) Spokesperson Mahir Ünal said at a press conference on Monday.

“It was declared to avoid any legal responsibility for the brave people who held their country with their bare hands and protected the country at the cost of their lives that night and the following morning,” the spokesperson said, adding that claiming the item in the decree would cover actions against current terror acts is “only disinformation.”

Tezcan also criticized the reshaping of top courts with the government decrees.

“With the new state of emergency decree, we see that the high judicial bodies are being regulated,” he said.

“Executive bodies cannot regulate judicial bodies with State of emergency decrees. State of Emergency does not grant you with this power. Why do you need to regulate the number of members of the Council of State? We know why you have an urge to regulate because you are pursuing dictatorship,” he added.

Criticizing the Constitutional Court’s previous decision that refused to give a verdict on the state of emergency decrees, Tezcan said the main opposition will appeal to the top court one more time.

“The Constitutional Court reversed its own precedent because it has been acting as a coup court, not as a constitutional court,” he said, recalling that the top court had ruled in 1991 that the emergency decrees have to be compatible with the aims of the state of emergency.

He stated that the regulation which changes the configuration of high judicial bodies has breached the legal boundaries of the state of emergency rule.

“You are trying to create a judiciary which is silent for the crimes you have committed and lack any justice and conscience against your enemies,” he said.

The opposition HDP spokesperson Ayhan Bilgen has called out opposition parties to convene the parliamentary assembly, underlying the immediacy of the issue.

“We make an appeal to all parties and all lawmakers for an urgent convention of parliament,” Bilgen stated on Monday.

“Tomorrow can be too late,” he added stating that decrees will “make Turkey face a dilemma between a civil war and a coup, and inactivate Turkey’s democratic mechanism.”

Turkish Business and Industry Association (TÜSİAD) issued a written statement on Monday, criticizing the controversial article as being “open-ended.”

“Open-ended regulations within the context of the new decree might lead consequences which would not be suitable for the principle of the state of law,” the statement read.

“Our concern is an intensification of the division and insecure environment in our society. These regulations might harm the vision of democracy, security and state of the law in Turkey,” it added.