HDP is expecting ‘Those with an objection’ at the 'Resistance Vigil'

If all sections who say, 'I have an objection' espouse the 'Resistance Vigils,' there is no doubt that the 'vigil' will receive a broad support. 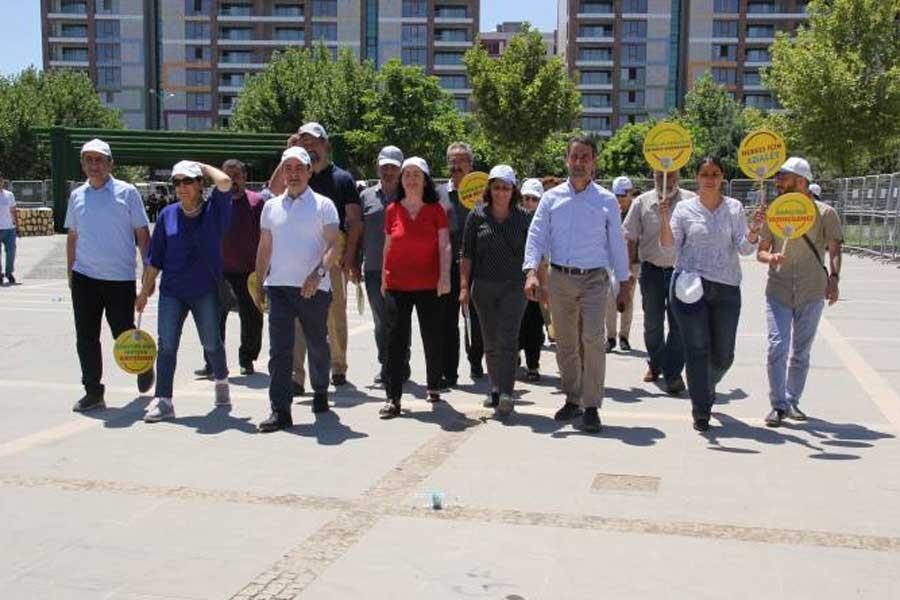 The broadening repression and soaring violence because of steps were taken in the direction of “the single man single party” regime is witnessing also the growing reaction against it.
Subsequent to the “Justice March” of CHP (Republican People’s Party), now the HDP (Peoples' Democratic Party) is setting out a “Resistance Vigil” and is appealing to “all who has an objection” to participate in this “vigil.”

On the day when 17 Republicans, 12 of whom are under arrest, appeared before the court, Osman Baydemir, the spokesperson for HDP, announced that they will be starting a “Resistance Vigil” at a press conference held in the state Assembly. In Turkey where countless forms of repression take place, with every single one worthy of being regarded as a scandal in any country where the name of democracy and justice is invoked, prohibitions brought about as part of the Fight Against Terror Act and Martial Law have come to encompass almost all sections of the society now.
In this process, one of the main targets of the strategy devised to facilitate the “the single man single party regime” has been the Kurdish forces and, to be sure, the HDP.

AGAINST THE CLOSURE OF THE LEGAL POLITICAL FIELD

HDP is a political party who have 60 MPs elected to the Assembly with the support of the Kurdish people who have demands and who have waged a very important struggle for these demands and Turkey’s forces of democracy, garnering support from some 6 million electors. And indeed, the HDP has been the most important target of the AKP-MHP coalition since the 7 June 2015 elections. For, the AKP-MHP coalition, due to viewing the HDP and the forces of democracy supporting it as the main obstacle in the way of ensuring “the single man single party regime,” throughout the period that elapsed ever since, has been striving to drive the HDP out of the Assembly and arguably, even to outside the field of legal politics. In order to ensure this, the Bahçeli-Erdoğan partnership, having arrested the MPS of the party, including its coleaders, had mobilised the AKP and MHP groupings within the Assembly to annul the status of HDP representatives as MPs. Party leaders and members have been arrested in their thousands, around a hundred council leaders have been removed from their positions to be replaced by “administrators” while very many leader and elected directors of HDP and DBP (Democratic Regions Party) councils have been arrested.
The HDP is instigating these “Resistance Vigils” to break the siege but also as an initiative to open the way for social sections cornered with the Fight Against Terror Act and Martial Law.

BROAD SUPPORT FOR THE “RESISTANCE VIGIL” IS OF UTMOST IMPORTANCE

The first of the resistance vigils has taken place in Diyarbakır on Tuesday. More are due to take place in İstanbul, Ankara, İzmir and other cities.
Due to start after the outdoor meeting of the HDP parliamentary group, the vigils will be taken up continuously for a week by 10 HDP MPs while all citizens are invited.

Osman Baydemir, the HDP spokesperson, appealed for support of “Resistance Vigils,” stating “The Assembly, has been turned into the notary office of the government. With the Martial Law, Decrees Under Law and politics of hostility at home and abroad, the country is subjected to an onslaught. While the sanctity of the right of defence is held in complete contempt, the defence itself is becoming a subject of trial… We are going to present a complete resistance of conscience and justice without any violence, sticks or stones… We are going to continue so long as the Martial Law itself continues… You, those who have been left breadless because of Decrees Under Law, academics, mothers who have lost their children, we are expecting all of you. Whoever says no to war, whoever thinks isolation is a crime against humanity, we are expecting you. We are expecting all those who have an objection.”

It is a matter of curiosity as to what kind of fault will the Erdoğan-Bahçeli propaganda will find in the “Resistance Vigils” having so opposed the “Justice March” taking place from Ankara to İstanbul with claims that “Justice is sought not at roads but in the Assembly and at courts” and went as far as to tarnish the march as “support for Gülen Movement and for terror!”

Are the AKP spokespeople going to say “Democracy and justice is sought not by sitting and sleeping in parks? Come to the Assembly!” to the HDP MPs or are they going to find other excuses; what is the approach of the governorship and security forces against these resistances going to be; if not in Diyarbakır, when the “Resistance Vigils” are carried to other cities, we are going to witness the kind of developments occurring over the provocation of nationalist and “Ottomanist” circles. To be sure, here more important than the position to be taken up by the government will be the reaction of the public to the “Resistance Vigils.” If the forces of democracy, all sections who say, “I have an objection” espouse the “Resistance Vigils,” there is no doubt that the “vigil” will receive a broad support. To be sure, the only way to prevent the bans and prohibitions of the Government and local administrators as well as the provocations of para-civilian circles will pass from the broad support that will be given to the “Resistance Vigils.”

Call for unity from the HDP MPs organising the Resistance Vigil